Popcorn director Roland Emmerich(“Independence Day“/”2012″/”Godzilla”) helms this overlong idiotic noisy summer blockbuster action pic that hits rock bottom in his Hollywood oeuvre. I can’t think of one thing I liked about it. It not only was a dumb action movie with unbelievable heroics and risible acting, but was exploitative in trying to cash in on the current war on terrorism. WriterJames Vanderbilt deserves an Oscar for the worst screenplay of the season. There’s not one single thing about it that doesn’t seem phony, trite and poorly written.

When the retiring head of the WH secret service Martin Walker (James Woods) organizes a terrorist paramilitary invasion of the WH, with a bunch of angry rejects seeking revenge on the administration for supposedly doing them wrong, it’s up to a rejected applicant for the secret service, John Cale (Channing Tatum), taking a tour of the WH with his cell phone savvy and history smart adolescent daughter Emily (Joey King), to leave the tour to save President Sawyer (Jamie Foxx) and eventually foil the entire terrorist plot to nuke our Middle East enemies, rob our treasury and bring back to the WH the military industrial complex.

Maggie Gyllenhaal has the thankless empty role of the secret service big deal, who rejected Cale for the post and whose performance amounts to now standing outside the WH wetting her underwear at how bravely Cale acts in the face of danger while the WH goes up in flames and all the other secret service agents get wasted by the homegrown terrorists.

It’s hard to believe crap like this can pass muster as a legit pic by a big studio, but I guess it did and guess again it will make big coin drawing in the undemanding. 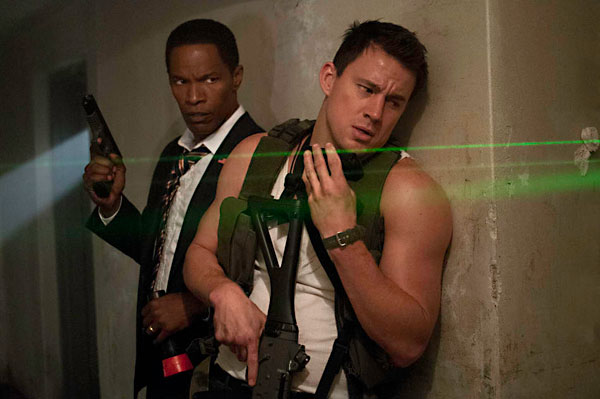