“If you like your westerns with a salsa topping, this one should be spicy enough.”

A cynical and brash Western that anticipates a new type of Western soon to come that makes its heroes into amoral characters. It’s the forerunner to the likes of the Sergio Leone “spaghetti western” and Sam Peckinpah’s The Wild Bunch (1969). It was the first release in Superscope and the lush photography by Ernest Laszlo is stunning (it was filmed on location in Mexico). Robert Aldrich (“The Dirty Dozen”/”Apache”) directs with an eye for choreographing the action sequences and gunplay. It’s based on a story by Borden Chase and written by Roland Kibbee and James R. Webb. Basically a “buddy film” that tries hard to be appealing as both a comedy and a lively action-packed nonsense yarn filled with more double-crosses than you believe possible in a ninety-four minute film; it also makes the most out of having Gary Cooper and Burt Lancaster as stars. If you like your westerns with a salsa topping, this one should be spicy enough.

It’s set during the Mexican revolution of 1866 that features the rebel Juaristas led by General Ramírez (Morris Ankrum) trying to free the country of the French-supported Emperor Maximilian (George Macready) and his crooked regime. Two American soldiers of fortune, a cynical gentlemanly ex-Confederate major Benjamin Trane (Gary Cooper) who lost his land during the Civil War and his untrustworthy misanthropic diabolical grinning career criminal rival Joe Erin (Burt Lancaster), meet over a stolen horse and show a willingness to team up to work for the highest bidder down Mexico way. They sign on with Maximilian to escort the Countess Marie Duvarre (Denise Darcel) from Mexico City to the port of Vera Cruz, where she’s to take a boat to Paris. In her coach is secretly hidden under the seats $3 million in gold. Heading the lancers from Maximilian’s army is the loyal Marquis de Labordere (Cesar Romero), who happens to be the lover of the Countess but is cagey enough not to trust her. Also along for the ride as part of the American mercenary forces are a gang of rowdy cutthroats that include Donnegan (Ernest Borgnine), Pittsburgh (Charles Buchinsky, before the name change to Bronson) and Tex (Jack Elam). As the trip unfolds, Ben and Joe try to double-cross each other over the gold, with each trying to show whose the better man, but nevertheless remain partners after every incident is cleared up. While escaping from a Juarista ambush, they are joined by pickpocket Mexican peasant and rebel sympathizer Nina (Sarita Montiel). Ben falls for the hot Mexican senorita, who urges him to give the gold to the rebel cause; while Joe courts the cunning French Countess, who plans also on stealing the money and goes partners with the two Americans as she offers them an escape route by sea. The two lovebirds will later conspire on dumping partner Ben and dividing the gold in half, but soon find they can’t trust each other. It all boils down to see who is standing at the end and where will the gold end up, with Ben showing he’s capable of goodness as a hero figure and Joe as the anti-hero showing he wasn’t fibbing about being a bad dude. If Cooper and Lancaster were not starring, this film would have probably keeled over as a dud. But since they are in it and they always turn in top professional work, the film at least has some star power appeal. 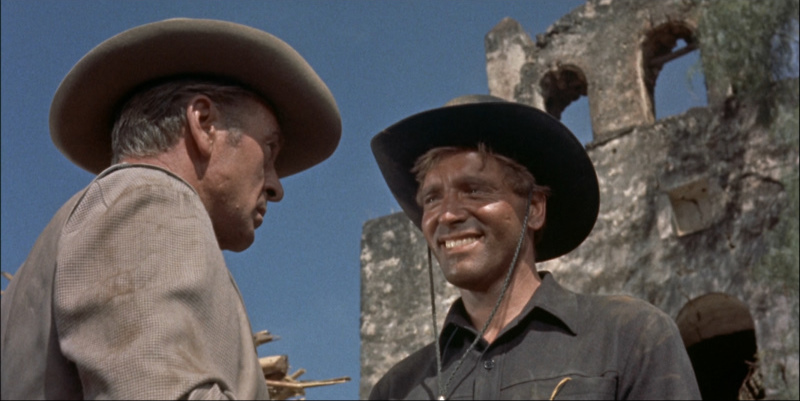