“One of the most obnoxious sci-fi films ever.”

One of the most obnoxious sci-fi films ever. It offers Hollywood’s silly response to the 1950s ‘Red Scare’ sweeping the country and promoted by the McCarthy senate hearings looking for commies under every bed cover. To realize how dumb this Cold War film is, try this question of the plot’s summary on for size: Can it be that the Martians are signaling Earth and that their leader is actually uttering the very word of God?

Warning: spoilers are throughout review.

This is one of those really bad propaganda films that has no entertainment value, as it shows how paranoiac this country can be and how it can use religion at the drop of a radio signal to promote materialism and Christianity as a superior way of life than communism. This one might be the strangest and most twisted Red Menace film of all time. It ends with a hydrogen explosion in the lab killing two good American scientists and one lousy ex-Nazi scientist now working for the Russian Communists. The last message heard from Mars is an abbreviated one (thank God!): “Ye have done well my good …” then there is just silence. The film leaves one with the impression that Mars is ruled by God.

The nonsense begins when scientist Chris Cronyn (Peter Graves) and his boring wife Linda (Andrea King) think they contacted Mars with his specially built radio (“hydrogen tube”), as he follows his son Stewart’s suggestion and uses Pi as a communication link. Admiral Carey (Sande) is there to decode the messages for the government and the press. The messages are really being transmitted by an insane ex-Nazi scientist, Franz Calder (Bergof), now working for the commies in Russia but living secretly in the Andes, who falsifies the messages for his own amusement and to destroy American democracy and the western world’s capitalistic economic systems. The phony Martian messages from the commie scientist causes the U.S. economy to crumble out of fear that the extra terrestrials have invented things to replace such resources as coal and oil. Don’t ask me to explain how all of a sudden ninety percent of the world workforce would lose their jobs and there would be a run on the banks because of this message. But that’s exactly what this filmmaker is asking us to believe.

But just when things look bleak for the Free World, a spiritual message comes delivered on a different frequency. It’s Christ’s “Sermon on the Mount.” This prevents the Free World from self-destructing as there is a return to religion, and in Russia the peasants revolt against their commie captors and kick ass. This restores the church to power in Russia, as a Christian patriarch takes over as head of the government (boy, what an improvement!). If that wasn’t enough of an accomplishment achieved with God’s help, the mad Calder escapes an avalanche (I’m not kidding!) and enters Cronyn’s lab to accuse him of stealing his radio device. Calder then threatens to expose him to the press as a phony. But in a rage at hearing God’s message begin, he decides to blow up the lab.

This Red Scare movie is made for zombies from another planet, or witch hunters who want to justify how their dirty work is necessary. It’s a classic in a negative sense, a must see for those who can’t believe how a bad film can really be bad. 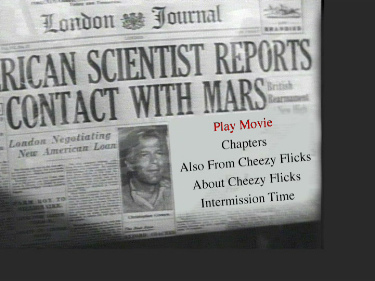