Journalist Matt Tyrnauer (a longtime editor and writer for Vanity Fair) is the first-time director-writer of this frothy doc on the iconic fashion designer Valentino Garavani, the haute couture of the fashion industry. The visually pleasing pic never gives us the gravitas needed to overcome all its superficiality, as it covers only a few days in the international divas lavish lifestyle. It takes pleasure flaunting the appearances in Valentino’s gilded world of the rich and famous and the sharp interplay of Valentino with his longtime shrewd business partner and companion of 50 years, Giancarlo Giammetti.

The septuagenarian Valentino tells reporters backstage at his spring prêt-à-porter show in February 2007 “I love beauty—it’s not my fault.” This is Valentino’s way of saying that women “want to be beautiful” and it’s his business to give them what they want–fantasy gowns fit for royalty.

There’s no attempt to chronicle how the business of fashion has evolved over Valentino’s long reign as the unofficial king of fashion. Instead the film slickly covers the last year of the designer’s reign, as Valentino retired in September 2007 after 45 years as couturier. It details the designer’s three-day swan-song extravaganza in Rome, which included a retrospective of his work at Rome’s Ara Pacis Museum and a celebration at the ancient Temple of Venus in the Roman Forum befitting an emperor–with fireworks and flying models. Tyrnauer also films Valentino’s private jet, his six traveling pugs, his fully staffed yacht, his 17th century chateau outside of Paris, his villa in Rome, his ski retreat in Switzerland, his town house in London, his luxury apartment in Manhattan and his workplace atelier where some 70 seamstresses work only by hand to prepare the 2006 spring/summer collection for its Paris debut. A Nino Rota score keeps us occupied while all the shallow developments in the fashion world flash before us as sugary offerings.

Tyrnauer means to cast an evil eye on the large corporation that took over the House of Valentino and threatened the perfectionist’s old-fashioned traditional way of doing business, as it extols adulation for the artistic virtues of Valentino and views his excesses as a thing of honor. It even lauds the man known by his first name, who became famous for his signature “Valentino red” and dressing such celebs as Audrey Hepburn, Julia Roberts, Princess Diana and Jackie Kennedy, for sneaking away to Gstaad at the time when investment bankers were busy taking over his company.

We learn Valentino fell in love with the 1941 movie “Ziegfeld Girl,” and those richly designed costumes became his template for success. But aside from all the fun-loving glitter and the frivolous look at the man, it never touches on his childhood or much of his personal background–leaving us with a sketchy picture of him. The entertaining doc never says anything but the obvious: that V. has a talent for creating beautiful clothes. 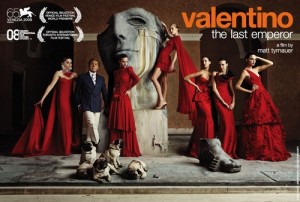 MAGIC OF MELIES, THE