An efficiently made fast-paced action-packed gangster B-film directed by Roger Corman; his first gangster film is modeled after Don Siegal’s Baby Face Nelson. There’s no attempt to make it arty, instead it indulgences its pulp material to please its audience and makes a virtue of its seedy setting, limited scope, and one-dimensional characters. It’s set during the Depression-era and chronicles the crime spree of Machine Gun Kelly (Charles Bronson), a legendary gangster who is one part cold-blooded killer and another part trembling mug. This was Bronson’s crack at stardom in his first-ever lead role, and the future action star comes true in grand style. Cinematographer Floyd D.Crosby’s sharply drawn shadowy black-and-white photography added greatly to the thriller, keeping pace with Kelly’s rat-a-tat-tats. R. Wright Campbell offers a taut script.

The film picks up when small-time thug George Kelly is rising in national fame due to his hard-bitten, sexy, manipulative, moll, Flo (Susan Cabot), who thrives on newspaper publicity. Kelly’s gang knocks off the Lebanon bank for $42,000 and Kelly takes down a guard with his machine gun. The gang, Howard (Jack Lambert), Maize (Wally Campo), and Kelly, escape a roadblock by switching cars and then meet in their hideout. When gas station owner Harry (Frank De Kova) doesn’t get paid immediately for his help, he threatens to have his caged mountain lion mangle Kelly. Things are soon straightened out between the two, but when Fandango (Morey Amsterdam), the man who ended up with the money bag in the car switch, tries to take $6,000, he’s tossed to the mountain lion who takes off his arm.

The gang’s next bank robbery in Elizabeth Town gets botched when Kelly freezes upon seeing coffins delivered and he fails to get to the bank in time to cover his men. It results in Maize, the driver, killed by the pursuing police but Howard escaping to join a rival gang. When Howard warns Kelly to quit robbing banks or else, Flo goads Kelly into responding by wiping out the gang single-handedly with his machine gun.

Kelly brings the physically big Apple (Richard Devon) into his new gang, and they kidnap the nine-year-old daughter, Cheryl Vito, of a steel-magnate, and her nurse Lynn Grayson (Barboura Morris), holding her for $100,000 ransom. Kelly mistakenly uses Fandango to make the ransom pick up, but the one-armed man wants revenge and squeals to the police.

Kelly is portrayed as a hot-tempered bully, an infantile-like hood with a death phobia, who is dominated by Flo even though he occasionally asserts his manhood by slapping her around and barking out the orders in a fearsome way. By the conclusion Kelly is shown to be a coward, who became Public Enemy Number One through Flo’s efforts. Kelly is pathologically afraid of dying and doesn’t live up to his colorful nickname as he meekly surrenders to the police, who surround the hideout where he has the child. 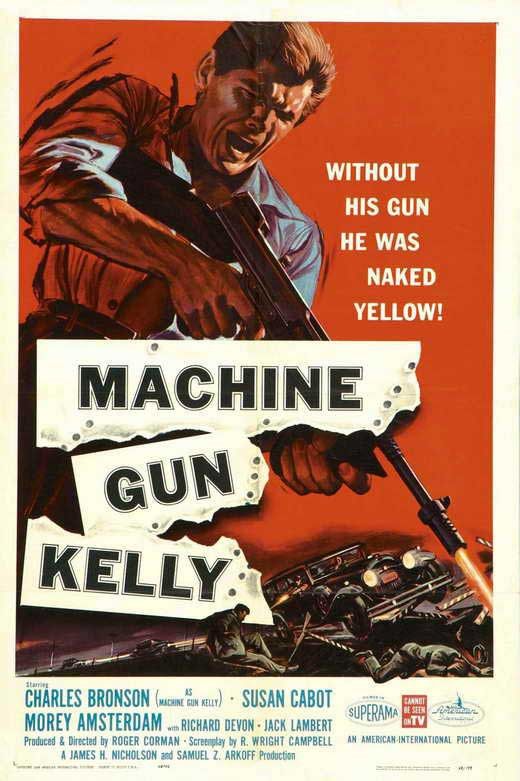