A stunningly beautiful visual experimental Buddhist film, that’s baffling because it defies reason and leaves us wondering about its sensibilities. It offers up a deadpan humor, as it tells in a matter-of-fact tone a playful but serious tale about ghosts, trying to recall one’s past lives and preparing for the next life. Thai-born director Apichatpong Weerasethakul (“Tropical Malady”/ “Syndromes and a Century“/”Blissfully Yours”) bases it loosely on a book of stories by a Buddhist abbot and offers a mesmerizing magical film on the Eastern notion that death is not the end but just another link to the infinite possibilities of reincarnation. There’s no push for the pic to be anything but imaginative, as it uses a religious Zen theme but is not at all religious. In fact it’s a lighthearted dreamy film, that one can probably (to a point) apply whatever meaning to it that might strike your fancy. So don’t worry if you don’t get it all, as trying to uncover all its trails would probably be a futile exercise (though it’s worth seeing more than once for its sheer beauty and the way it fascinates the senses). It also sends out good vibes and offers moments of bliss. The unique, sublime movie wasthe winner of the Palme d’Or at Cannes 2010.

The gentle, elderly and world-weary Boonmee (Thanapat Saisaymar), a former photographer, the character of the title, is haunted by memories of his long life and retires to his paradise-like secluded country farm estate in the north-east of Thailand to live out his final days in the company of a few family members. He’s also befriended by a devoted Laotian illegal immigrant, Jaai (Samud Kugasang), who administers his dialysis and works on the farm with other migrant workers to take care of the tamarinds and bees.

The spry but elderly Jen (Jenjira Pongpas) and her wide-eyed young nephew Tong (Sakda Kaewbuadee), enter Boonmee’s enchanted forest in Isan to visit him after his release from the hospital because they have no curative treatments for his kidney failure. The relatives have driven up from the city. Jen is the widowed younger sister of Huay (Natthakarn Aphaiwonk), Boonmee’s sweet wife who died nineteen years ago at the age of 42. One evening while dining in the jungle house porch Jen, Tong and Boonmee are visited by Boonmee’s dead wife Huay, who has taken the form of a ghost. They are soon joined by his long-lost son Boonsong, who disappeared when a college student six years after his mother’s death and his disappearance is linked to student unrest and conflict with government officials. Boonsong has the form of a monkey ghost. His red eyes shine in the dark. Since the family are believers in the spirit world, no one is that surprised by the visit. Huay explains that she has always been around her hubby, because ghosts are attached to people and not to places. Sensing her hubby is in pain, Huay has returned to help him and guide him to the other world.

When the Laotian illegal immigrant returns home, Huay takes up the duty of caring for Boonmee and administering his dialysis. Realizing his final days are up, Boonmee visualizes all his past births were in this jungle region. He recalls in his other lives being an ox and a talking catfish, who has sex with a jungle princess (he might have also been the princess). When death finally strikes, the calm Boonmee has staked out a glistening hill-top cave (womb-like) for his departure spot. He senses this is the place where his first life began. Boonmee worries only about having a good next birth, as he recalls his karma might not be perfect because he killed a few communists during the days of Thai political unrest and bugs that were killing his tamarind trees.

In the film’s most head scratching conclusion, Jen, Tong and Jen’s teenage daughter (Kanokporn Thongaram) are seen in a modern motel after the funeral. It turns out Tong is a monk, who showers while the ladies are glued to the TV. What that’s all about is anybody’s guess. But it does end things in an obscure paradox, that might indicate the world is both real and an illusion–a place where there’s no escape from either the spiritual or material world.

Though not a film that can grab everyone’s attention, those who come to it with an open mind and are entertained by its fantasy world projections will be rewarded with a movie experience that can move one in spiritual ways. It gently reminds us (in a most subtle way) that it’s normal in the modern world to either communicate with ghosts or to communicate through TV, and that life experiences are so vast it would be foolish not to take advantage of all the opportunities. 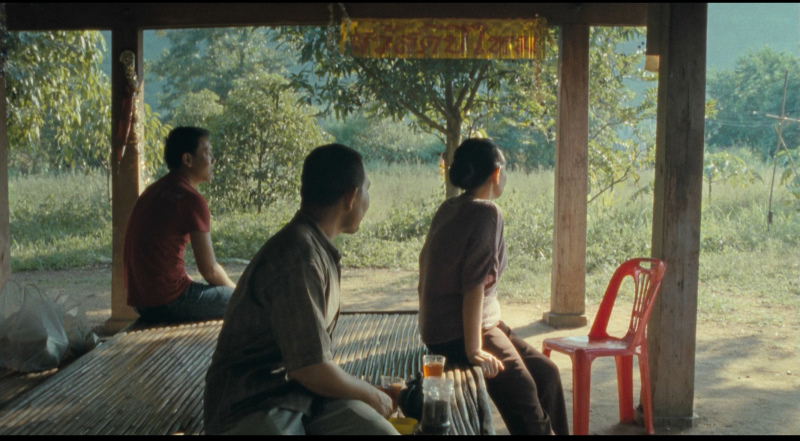