“The film’s images are always powerful, even if the dialogue seems superfluous.”

Keitel, if you stretch your imagination a bit, is a great American film director returning to his native Greece after 35-years in the States. His controversial films receive high praise or condemnation from the Greek crowds. Keitel is returning to the small village he was born. The faceless village people, dressed in black, come out in the open market at night to see a showing of his film in the rain (now, that’s a real homage to films!). There is also the ominous presence of armed riot police controlling the crowd.

Keitel’s purpose is twofold: he is on a journey (a la Ulysses!) to reconstruct his past and he is also anxious to see if he can recover 3 lost reels from the Manakia brothers, they were the first ones to shoot a film in Greece (1905). What fascinates him, is that they saw the century come in with its hopes and aspirations. But they were not politically motivated as filmmakers. They were mostly interested in recording what went on with the people and the times they lived in. They wanted to observe what was right and wrong about those times, regardless of the mess that resulted from the mistakes the politicians made.

This is both an ostentatious and mesmerizing film, about a film director’s obsession with the importance film plays in recording history. It is also a bleak film that goes on its long and weary journey over hostile territories, where governments could never be anything but inhumane and where the revolutions betrayed the people. What lingers are the lasting images of isolated places, the eerie silence of the landscape, and the chilling insanity of the cold world.

Keitel leaves Greece for Albania crossing the border in a taxi and taking along an old lady, who has not seen her sister for 45-years because of the war. He leaves her off in the most somber of Albanian towns. She is alone, looking up at the cold buildings and feeling the emptiness around her, as we leave her with a look of desperation on her face.

Keitel travels to Bucharest in quest of the missing reels. He meets his mother through the films she’s in, and sees her as she was in 1945 adjusting to life in war torn Europe. This allows us to see what the director saw as a child. Again, it is a homage to how important it is to record history so that it cannot be forgotten.

The journey takes Keitel to Macedonia, Bulgaria, Belgrade and Sarajevo. This allows for the film to wax poetic, to become a meditation on the landscape, to indulge our sense of the incomprehensible as we see what the film-maker is seeing; we all become foreigners in this lost century, where the truth has been maimed.

The film’s images are always powerful, even if the dialogue seems superfluous. Sarajevo, in the middle of the ethnic cleansing war, is an uninhabitable place where snipers shoot at anything that moves. It is starkly photographed in the fog and in the bombed-out buildings, where the people try to exist and make life as normal as possible. We watch them rejoice in the fog, because now the snipers must stop shooting till it clears. The fog, while it lasts, allows the inhabitants to live a normal life; though, the dangers are always present.

The film cries out for peace and art and civilization to prevail, and wonders how great Greece could have been if it were not for blind hatred and ongoing wars. The film is tiresome and too cliché ridden, at times, for the potent message it delivers, which limits somewhat its enormous aesthetic achievements. But Theo Angelopoulos is a great visual filmmaker and his film has enough ideas and vision to sustain his efforts. 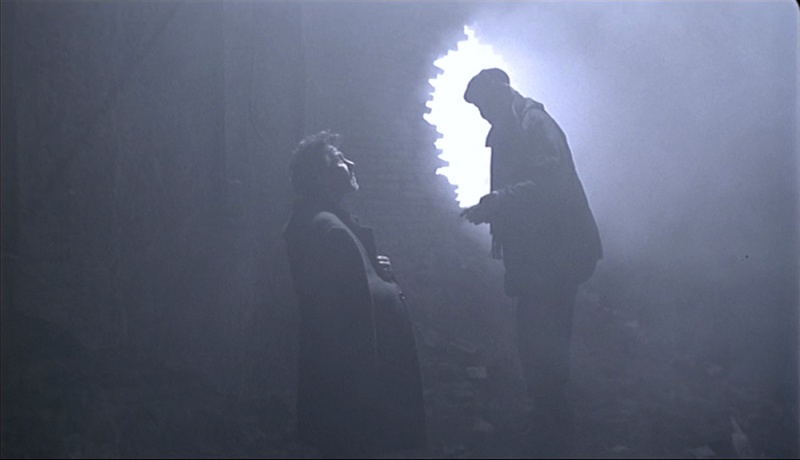