If you ever were interested in the soft porn exploitation film and its history, then the documentary directed and cowritten by first-time filmmaker Ted Bonitt might be a good place to start. But be warned that its ‘bring you into the tent’ title is only selling the sizzle not the steak. The title was taken from a scam 1954 documentary called Mau Mau, about their Kenya uprising, which was legit enough to get the later to be renown newscaster Chet Huntley as narrator. But the film also spliced in a few moments of an exploitation rape attack on a bare-breasted woman with local African-Americans in the Santa Monica studio substituting for the Africans and the studio using a painted African backdrop. The idea of this shot was to get some nudity and sex onto its poster advertising campaign, as sex is really what the film was trying to sell. Dan Sonney, who bought the release rights to the film which he called a travelogue, claims the box office mistake was in the title “It should have been Mau Mau Sex Sex, because sex is what sells.”

What Mau Mau Sex Sex is trying to sell is their portrait of “America’s oldest living independent filmmakers,” the sleazy sex film pioneers and sometimes partner team of 84-year-old Dan Sonney and 76-year-old David Friedman. They were the grand masters of that tawdry genre of alternate films that the major studios wouldn’t touch with a ten foot pole. Though their films are trashy, the old-timers are portrayed as genial good guys with a sense of modesty and humor. The dynamic duo created and produced a series of such unworthy films like Blood Feast, She Freak, The Defilers, Forbidden Adventure and A Smell of Honey A Swallow of Brine. A schoolboy like giggly film historian and horror film director named Frank Henenlotter gleefully looks back at those trashy films that made Sonney and Friedman a bundle of cabbage. The films were most popular in the 1960s, when it became fun for all sorts of Americans to rebel against what was tabu. Frank says the guys followed the formula of preaching morality by showing all the sin. Evidently Blood Feast, which opened in a drive-in in Peoria, was their biggest box office hit. It was made for $24,000 and grossed around $30 million. The Defilers set the standard for the rough trade sex film, as the boys branched out from the usual sleaze film shooting of a nudist camp–cast with models to take the place of the unattractive nudists. The film Dave wanted most to succeed was his carny noir She Freak, but the film highlighting the carnival hustle atmosphere which Dave loved so much (he owns a carnival in Alabama) ended up losing money. Their proudest scene they produced, was substituting the large tongue of a sheep for a human one in Blood Feast, as their sexy starlet had her tongue ripped out and raspberry jello served as dripping blood.

Most of the film’s time is spent showing these geezers barely getting around on their own as they cope with old age, relishing in their caring friendship by ribbing each other, reminiscing over the good old times they had making such junk, pointing out how they got started making sleaze films, recalling cinematic events from their film clips, pointing proudly to their happy longtime marriages and letting us in on how conventional and boring a life they led. They seem proud that they fought the censors, who from the 1930s to the mid-1960s preferred going after them rather than the established studios. The boys claim the mainstream studios never fought the censors, that they were the only ones in the business who did. The censors didn’t allow full frontal nudity, only titty and ass shots, which everyone had to conform to.

It’s an easy film to take on its own limited terms, as its lighthearted approach doesn’t get bogged down with unnecessary analysis and shuns taking easy potshots at the peddlers of smut. The subject matter is not of great interest for me, but the documentary gets through its sexploitation lesson by exuding charm and humor. The boys are no longer making such films because of the hard-core X-rated film coming on strong in the 1970s, as they didn’t wish to exploit such no-holds-barred territory. They wolfishly look back at themselves as sexual revolution leaders during their time period, who made a buck because above all else they were good businessmen. They gave the public what they wanted and had a blast doing it. I guess you can never go wrong counting on the public’s bad taste. 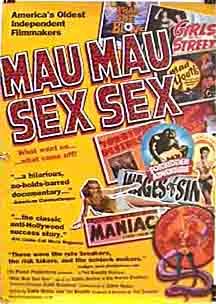