“Who could completely resist a picture with Carmen Miranda having a bowl of fruit on top of her head?”

A silly MGM musical comedy directed without any passion by Robert Z. Leonard, that is not as witty or well-acted as the 1940 film it remade–Deanna Durban’s It’s A Date. It’s about a gold-digging mother (Ann Sothern) and daughter (Jane Powell) team who compete over the same singing role and unwittingly are pursuing the same man (Barry Sullivan). Everything about this film feels forced. But, then again, who could completely resist a picture with Carmen Miranda having a bowl of fruit on top of her head?

Popular Broadway star Sothern vacations in Rio before starting her next stage show. Unknown to Sothern or her pretty and ambitious daughter, Powell is hired to appear in her starring Broadway role. The Rio venue is reason for some goofy musical numbers with a Brazilian flavor, though some opera is also thrown into the mix as a touch of MGM class.

It never really excites, but the costumes are colorful and the music is bouncy and the viewing is effortlessly pleasant. And what the hell its slight story is so easily forgettable, that even immediately after viewing one might not be able to recall ever seeing the film. The song with the most pep was “Time and Time Again.” 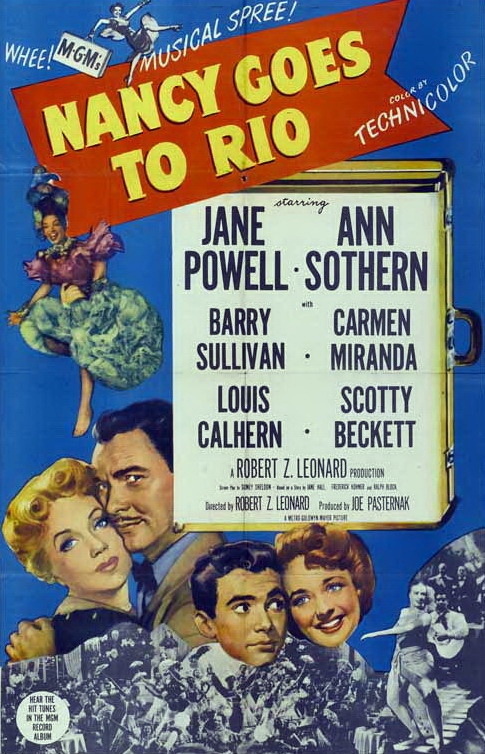