“Inconsequential and inert drama about an Army deserter during the Vietnam War.”

Inconsequential and inert drama about an Army deserter during the Vietnam War. The dialogue sucks and the actors are portraying shallow characters. It’s directed without vigor by Robert Wise (“The Body Snatcher”/”The House on Telegraph Hill”) and is written without vigor by Richard De Roy.

The idealistic Evan Bonner (Peter Fonda) is an Army deserter living abroad for the last three years, who decides to return to America to receive a court martial and a likely 4-year prison sentence.

Deirdre’s the daughter of a West Virginia coal miner, and back home has a bastard kid. The ‘two people’ come to Paris together by plane, where after a a day or two he has sex with her and falls in love. In 8 hours he will be in New York, where he will surrender to the authorities. She offers to support him in Europe, but he refuses.

The best thing I can say is that the DP Henri Decae did a good job photographing its location shots.

The reactions to the war, Fonda’s anti-war conduct and the romance are treated so superficially that whatever happens seems to be telling us not to worry–things are under control. If you overlook its blandness, you can get some good touristy pictures of Marrakesh and of Paris.

Estelle Parsons plays a fashion editor based in Marrakesh. 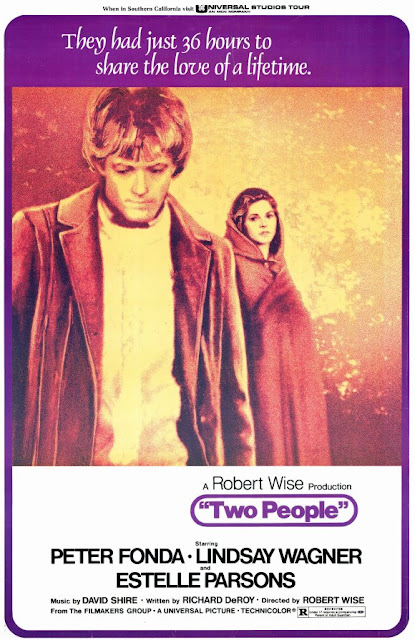 ROBERT FROST: A LOVER’S QUARREL WITH THE WORLD