“The European émigré director, Anton Litvak, shoots Stanwyck’s bedroom as if it were a luxury prison.”

This film was adapted from a Lucille Fletcher 22-minute radio drama, where Agnes Moorehead played the invalid heiress Leona Stevenson. This popular radio program was rebroadcast seven times between 1943 and 1948, starring Moorehead in a role that she had made famous. Hal Wallis, the Paramount studio boss, wanted a big name for the role when his company bought the rights to make this thin script into a movie, so he chose Barbara Stanwyck over Moorehead. This became a movie role she would become famous for and one in which she received an Oscar nomination for Best Actress.

The film opens as Leona Stevenson is seen confined to her bed in her summer home in New York with the telephone being her only means of communication with the outside world. She accidentally overhears a telephone conversation about a murder of a woman that is to take place that night at 11:15 p.m., as the telephone wires get crossed when she is making a call to her husband’s office. She is panicky that her husband Henry (Burt Lancaster) has left her alone and she is desperately trying to call his office to find out why, but the line is continually busy. So she asks the telephone operator to help and tries to convey to her the dreaded conversation she has just overheard, but the operator tells her to call the police because the call can’t be traced. The police only inform her that the information that she gave them is too vague for them to do anything about it. At the moment, she doesn’t tell the police that she is afraid for herself because she doesn’t suspect that she is the target of the murder.

The film plays on one’s fears of being alone and of being physically handicapped. Every sound becomes a dangerous one and familiar sights seem to now hold new dangers in them, as Leona is in the midst of a severe anxiety attack. Her father (Ed Begley) calls her regularly from their permanent home in Chicago, where he owns a big drug company and where she lives permanently in the same mansion with her husband. He tells her that Henry should be home and that he has no company business, and that he’ll speak to him tomorrow about just that.

Leona soon receives a telephone message wired by her husband that he is away on business for the weekend and won’t be able to see her until Sunday morning.

Anxious to find out where her husband is, Leona reaches his secretary at home who is only too glad to tell her that her husband made a luncheon date with an attractive woman named Sally Lord Dodge (Ann Richards). This brings back memories of how Leona met her husband eight years ago at a public dance, where she boldly stole him away from Sally.

The film uses the method of flashback to enlarge the story.

The Stanwyck character had always been a self-indulgent person, who gets what she wants. She wanted Henry even though he was from the wrong side of the tracks, a high school drop-out and working as a clerk in a drug store. After she married him, her father took him into the business and made him a vice president in the firm, and he settled into a life of luxury; but, he paid the price by becoming a henpecked husband who had to cater to all her whims or else she would suffer heart attacks or throw a temper tantrum.

Leona learns from a phone conversation with her doctor (Wendell Corey) that he told her husband a few weeks ago that she was as sound as a bell, that her problems are mental: she is a cardiac neurotic and doesn’t need medical help but psychiatric. He is surprised she doesn’t know this because her husband has a letter from him and promised that he would discuss this with you before you started your treatments.

In Leona’s phone conversation with Sally, she learns that Sally’s husband is an investigator in the district attorney’s office in New York and that she only had lunch with Henry to warn him that he is being investigated by the office.

Stanwyck’s world seems to be breaking down right in front of her as a scarier call follows from a person who identifies himself as a chemist in her father’s company, named Mr. Evans (Vermilyea). He tells of her husband’s plans to cheat the company by stealing one of their drug products and selling it through a fence named Morano (Conrad). Evans tells her that Morano has been arrested. He also tells of how Morano bribed her husband and forced him into following his plan to have her killed for her insurance money, money that Morano says the ambitious Henry owes him for trying to weasel out of their deal.

It takes Leona a long time to realize that she is the one targeted to be killed. The film sustains the suspense until the very end, as it now becomes a question whether she will survive the attack and how will Henry react as he calls at 11:12 p.m. and hears from her that Morano has been arrested.

The film is well-executed, mainly through the efforts of the director and the star. The European émigré director, Anton Litvak, shoots Stanwyck’s bedroom as if it were a luxury prison, thereby capturing the claustrophobic mood of the story; while Stanwyck turns in a finely tuned hysterical performance. It captured how she changes from an arrogant woman into a helpless one shrieking out in terror. Even as an intolerable human being she engineers our sympathy for her current plight, as we see that she desperately needs psychological treatment more than anything else. 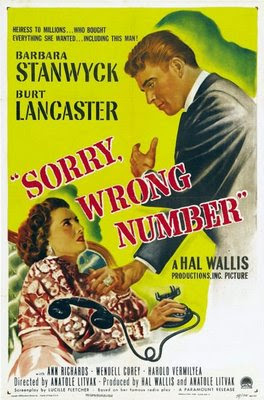 YOUSSOU N’DOUR: I BRING WHAT I LOVE