Noted Polish New Wave writer-director Andrzej Munk’s (“Eroica”) masterful anti-Stalinist thriller shows why he is considered by many to be the equal of his peer Andrzej Wajda. Ironically, Munk’s career was cut tragically short by an accident (died in a car crash while shooting the film Passenger) some four years after this film was released. “Man on the Tracks” is based on a first-rate taut screenplay by novelist and screenwriter Jerzy Stefan Stawinski. The film’s focal point tells of the crushing of the human spirit by those in power who can’t cope with someone who doesn’t fit in; this character story gives way to the exploration of how life was back in the Iron Curtain days of the 1950s and what were the hot-button issues between the party bosses and the workers.

A night train in a rural area moves full-speed ahead after getting the go ahead that all’s clear by seeing that only one light was on the signal system, only the engineer Zapora (Zygmunt Listkiewicz) and his assistant Nowak (Roman Klosowski) soon realize they ran over a man. The dead man turns out to be named Orzechowski (Kazimierz Opalinski) who until recently was the engineer of that same train but was forced to retire after forty years of dedicated service because of a run in with a spiteful stationmaster half his age named Tuszka (Zygmunt Maciejewski), who was out to get him because he made waves about the new unproven and inferior methods of operating the locomotive–activated, supposedly, in the name of efficiency, but instead leading to more inefficiency.

The next day an investigation takes place at the railroad office that’s spearheaded by high-ranking party officials and union representatives, and chaired by party boss Krokus (Janusz Paluszkiewicz). The investigators are not sure if it was suicide, murder, worker negligence or sabotage. Three men are called upon to give their accounts of Orzechowski’s activities leading up to the tragic incident. The opportunistic Tuszka tells how he unmercifully rode Orzechowski for not using the cheap coal to save money and how he was always fixing the machine parts, which cost the railroad money and time. Suspecting Orzechowski of sabotaging the equipment, the stationmaster forces him to take on Zapora as an assistant, someone who is beholden to the stationmaster because he secured Zapora a job when he was in trouble. Zapora pays him back as a spy. When Orzechowski complains, Tuszka uses it as an excuse to get rid of the old-fashioned, fusspot, outspoken, gruff engineer. Zapora next volunteers an account of his disrespectful attitude toward the efficient old-timer, who never liked him. Not sparing himself, Zapora tells about all their disputes and how the stationmaster promised him Orzechowski’s job if he cooperates in bringing him down. The third witness is a lineman named Salata (Zygmunt Zintel), who tells of his final meeting with Orzechowski and how he told the strange acting engineer, dressed in his uniform even though he no longer worked there, that he resented him for always snubbing him.

The investigation takes on the tone of Rashomon, except by the end we fully know the painful truth of what happened to the engineer and have a rough idea of how repressive and oppressive was the system under communist control. The exhausting railroad work is seen as a metaphor that depicts the downtrodden men as faceless and browbeaten for having lost their identities, and as subject to being crushed to death if they voice objections to the system. 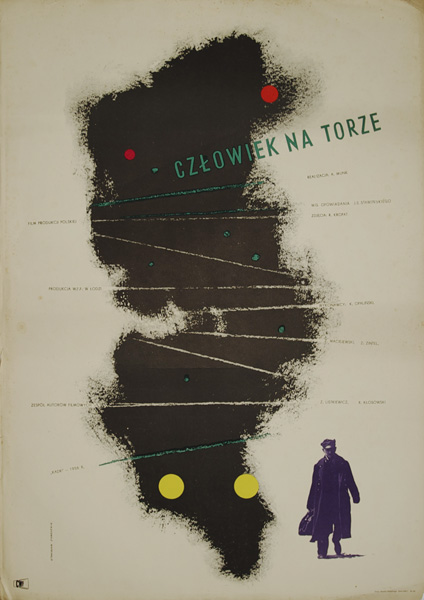