“Richard Kiley does a fine job as the crusading reformer.”

Phil Karlson (“Walking Tall”/”Hell to Eternity”) directs this semi-documentary political thriller based on the true story of a small Alabama town, Phenix City, right across the river from Columbus, Georgia, and the Ft. Benning U.S. Army base. The town which was founded in the early 1800s by runaway blacks and renegade whites, had by the 1950s became known as ‘sin city.’ Organized crime got its foothold in the town, taking charge of gambling, prostitution, a black market baby operation and even the local government. The Southern organization used muscle to keep the town corrupt by rigging elections and having the entire police force on its payroll.

A group of decent citizens, tired of their city’s bad reputation, elects a new honest attorney general, Albert Patterson (John McIntyre), to clean up the town and the criminal element. But, Patterson is killed by the mobsters before he can take office, and his young son John (Richard Kiley), just removed from military service in the Korean War where he served as a prosecutor major, takes office in his place. John pushes to clean up the town despite threats against his life and he succeeds as the military is eventually called in using its powers of martial law to establish law and order (the first and only time that was ever done in an American city). In addition to telling this story Karlson has a 13-minute prelude, compiled from newsreel footage and interviews with the original participants.

“The Phenix City Story” was co-written by Daniel Mainwaring and Crane Wilbur. This unique film paints an ugly picture of a breakdown of law and order on a truly grand scale. Richard Kiley does a fine job as the crusading reformer. The film immeasurably aided Patterson in his campaign for Governor of Alabama. He was able to defeat George Wallace due to the good publicity he received in the state because of this film. But Patterson was too inexperienced and proved to be an ineffective governor, losing to Wallace in the next election. Though this is a true story, Karlson exaggerated some events filmed after the town had a big cleanup. He used the actual names of the good guys for the most part and changed the names of the bad guys (to avoid possible law suits). It might be of interest to note that some of the same bad guys fled to Tennessee, where they set up another crooked syndicate. 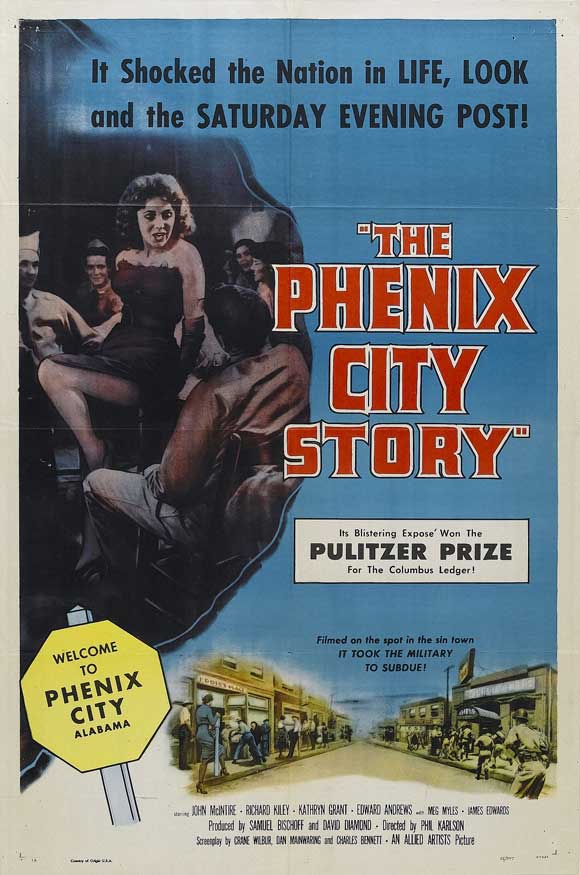