The plot was too absurd to be that concerned about it and the directing by Forrest Sheldon (“The Lone Trail”/”Wilderness Mail”/”The Sign of the Wolf”) was too lackluster to give it a spark. The story and screenplay by Barry Barrington is idiotic. But its main problem is that the star cowboy, Ken Maynard, is so wooden an actor and has a squeaky voice, that he’s unconvincing as the hero. If all that wasn’t bad enough, the action sequences were poorly executed and the B-Western was lifeless.

Eastern ranch owner Andrew Collins (George Pearce) brings by train to his western ranch his pretty daughter Doris (Ruth Hall), her stuffy spinster Aunt Sarah (Martha Mattox) and his creepy looking bookkeeper Smithers (Arthur Hoyt). A train robbery occurs, but when cowboy Blaze Howell (Ken Maynard) breaks it up he learns it was a fake hold-up performed by oily foreman Park Owens (Alan Roscoe) and the ranch hands to please the ranch owner. After Blaze apologizes for spoiling the fun, it’s learned the baggage car safe has been broken into and robbed and the messenger killed.

The lunkhead witnesses somehow think Blaze is the real robber and he runs away before arrested by the sheriff (John Beck), and then discovers there’s a $2,000 reward for his capture. The daring Blaze returns to the Collins ranch during a masquerade party to see Doris, the only one who believes he’s innocent, and to clear his name he sets a trap to catch either of the two guilty ranch hands, the foreman, who was stealing money from the ranch owner’s house safe to buy his own ranch, and Red (Al Smith), who was guarding the baggage car and was the only one with the opportunity to steal the $50,000 during the robbery.

The most ridiculous scene is saved for the climax, where Blaze on his horse Tarzan outraces the villain foreman fleeing in a car with the stolen train money he obtained after killing Red. 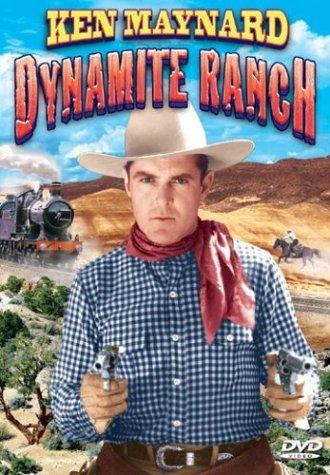