This black and white low-budget western was the second feature in a double bill with The Fuzzy Pink Nightgown (1957) starring Jane Russell. Noted B-Western filmmaker Lesley Selander (“Panhandle”/”War Paint “/”Shotgun”) leaves it dangling with questionable legal takes on the law and a tedious story where the action sequences look forced and fake.

Outlaw’s Son is based on the novel by Clifton Adams and is written by Richard Alan Simmons. The morose western also suffers from being moralistic, preachy and too eager to wear on its sleeve its earnest convictions over a father giving up his life to save his son from a life a crime. The title tells it all, in this inconsequential western.

Running away from home twelve years ago after his wife died in a horse riding accident, notorious outlaw Nate Blaine(Dane Clark) returns home to see his resentful 12-year-old son Jeff. He was raised to be respectable by Nate’s shopkeeper sister-in-law Ruth (Ellen Drew), but Nate’s return stirs the kid up and he now yearns to be raised by his outlaw father. When Nate threatens to take the child from Ruth, which is his legal right, Ruth falsely fingers him as a bank robber and killer of a teller. But Nate escapes from jail, and the kid grows up hated by the locals for the deeds of his father. Some ten years later the embittered Jeff works as a security guard for the local stagecoach line but is still hated in town because of his father’s bad reputation.

When Jeff, the marshal (Charles Watts) and the deputy (Robert Knapp) stop three of the four outlaws after they held up a stagecoach, one of the dying bandits confesses to robbing the Plainsville bank that fateful day ten years ago and that the stagecoach robber who escaped, Bill Somerson (Les Mitchel), was the killer.

Jeff is so upset with the news that his aunt lied, that he quits his stagecoach job and joins Somerson to rob his former employer as he uses his inside info on how to do it right. When Nate hears through the grapevine what his son is up to, he rides back to town to prevent his son from making the same mistakes he did. Lila Costain (Lori Nelson) is Jeff’s love interest, who is willing to accept her hot looking man as he is even though he has some shortcomings. Accepting the film for all its shortcomings is another story. 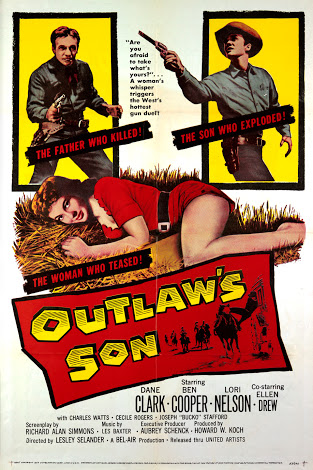