LAST DAYS OF POMPEII, THE

Ernest B. Schoedsack (“King Kong”/”Mighty Joe Young”/”Grass”) directs this pulpy sword and sandal film, whose highlight is filming the eruption of Vesuvius (a solid victory for special effects). It looks good on screen, but the portentous script by Boris Ingster, which was based on the story by Melville Baker and James Ashmore Creelman, leads me to give it a Coliseum-like thumb’s down.The opening credits reveal it was inspired by the bestselling 19th century historical novel bySir Edward Bulwer-Lytton, but took a radically different tract and was nothing like the serious book–using only its title. It artificially reduces the years between the Crucifixion and Pompeii’s destruction for dramatic purposes, making it historically impossible but offering no great problem for a Hollywood film meant as only entertainment and not too concerned with wrong dates.

The film tells about a poor but honest, hard-working Pompeiian blacksmith, Marcus (Preston Foster), who had the misfortune of watching his loving wife (Gloria Shea) and six month old child injured when run over by a hit-and-run chariot, and because he had no money for a doctor they both died. The destitute Marcus sees no recourse but to earn money in the arena as a gladiator, something he refused to do before. Forced to kill his opponents, something he regrets, Marcus nevertheless goes through a personality change and rises to the top as a gladiator and amasses wealth and gains prestige, two things he’s now obsessed with achieving as life necessities.

Feeling sorry for Flavius (David Holt), the orphaned 11-year-old son of an opponent he killed in battle, Marcus adopts him. When Marcus is forced out of the arena, he finds lucrative work as a slave-trader and horse-thief. Marcus’ odious career choices make him one of the richest men in Rome. While trading horses Marcus meets a seer, whose prophesy is that Flavius will go to the trouble spot in Jerusalem and meet “a great man” and that Marcus will be confronted with a life-altering choice between success and failure. Thinking the “great man” is Pontius Pilate (Basil Rathbone), Marcus goes to Jerusalem and gets hired to work for the dapper aristocratic Pilate stealing horses. On such a job mission, Flavius gets thrown from a horse, and a mysterious religious man, known only as “The Lord,” cures him. Later Marcus witnesses the Crucifixion of Jesus Christ at Calvary, and realizes that’s the stranger who cured his foster child. But Marcus was more interested in saving his gold than he was in saving Jesus, believing his religious message is nonsense. Now Marcus is an old man back in Pompeii, wanting his grown son Flavius (John Wood) to carry on his prosperous business. But idealistic Flavius is haunted by dreams of the man who saved his life and rejects his father’s plan and instead schemes to free runaway slaves who are destined for death in the arena. When Flavius is captured with the fleeing slaves, he’s forced to fight in the arena. But before the battle begins, Mt. Vesuvius erupts. Marcus is given a second chance to save either lives or his gold. The repentant Marcus this time chooses the more noble path, and sacrifices his life to save his son and a group of runaway slaves. That calls for a trip to heaven, where the greeter is, wouldn’t you know it, Jesus.

The film cost too much to make a profit on its release. Of note, acting honors go hands down to Rathbone, for his colorful performance. 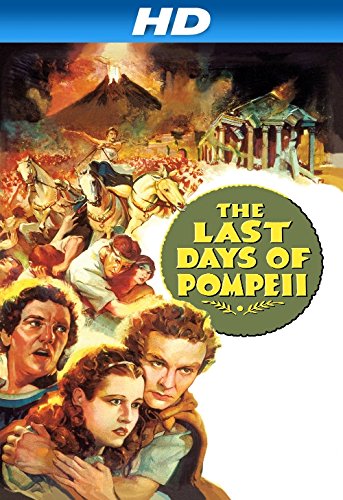