“It is not really a good film.”

An urban drama written and directed by Cinque Lee (Spike’s younger brother). The entire story takes place on a hot summer Friday afternoon in Brooklyn, as nineteen disparate repulsive characters keep bumping into each other. It’s a character-driven film, as some kind of story is woven out of their chance meetings. The characters range in types from: junkies, prostitutes, fences, car thieves, a rookie misfit magician, troubled school children, a pessimistic researcher about the human race’s date of extinction, some derelict mothers, and a mental patient (the funniest and nicest one in the film). They are unpleasantly funny as these losers struggle to survive, be rip-off artists, and some even resort to murder. Each is touched in a different way by street violence and urban heartbreak and their own inadequacies.

A woman named Darnell and her druggie husband Addison are late to pick up her son — from a previous relationship — at school. What happens next goes for the film’s plot. Addison goes nutsy, Darnell’s car gets stolen, the car thief finds a bag of dope in the car, Darnell’s child Ari is picked up at school by his mentally challenged father (Cinque Lee) who has escaped from his controlled residence, the friend of Ari’s mother is being wooed again by her former lesbian pimp, Addison has been accidentally snatched by a car jacker and all the characters get involved in a search for something or other–from medication for the mental patient to the mother for her missing child.

It is not really a good film, it lacks drama and coherence, but it was sadly funny and street-savvy in a gritty way. The film was shot by Cinque in 10 days with a nonprofessional cast of his friends, and the amateurism and superficiality clearly show. I doubt if this slice of life indie cost more than a pittance to make, and it shows. 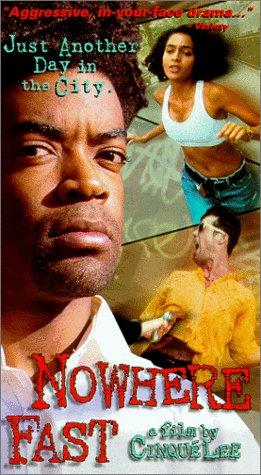