The film that placed Michelangelo Antonioni on the international scene after his fifth feature. It’s the first leg of his trilogy, on emotional sterility and the emptiness of the Italian bourgeois elites, that included La Notte and L’eclisse. It won the Special Jury Prize at Cannes in 1960. It’s noted for its innovative style of long tracking shots, sparse dialogue and long silences, the vivid relationship between the landscape and the characters and its blurring of space and time. Its plot features an unsolved mystery story as in Blow Up and The Passenger. This may be Antonioni ‘s masterpiece, but I enjoyed and related more to his 1970 Zabriskie Point even though it required less thought.

A group of young idle rich and bored socialites are on a holiday yachting cruise on the Aeolian Sea. On a stopover at a barren volcanic Sicilian island Anna (Lea Massari) mysteriously disappears. Perhaps it’s because her architect boyfriend Sandro (Gabrielle Ferzetti) upset her by showing too much attention to Claudia (Monica Vitti), a poor but attractive friend she invited on the cruise. The search for her that afternoon proves fruitless. When the socialites abandon the search and return to their life of luxury, Sandro and Claudia continue their half-hearted search on the mainland and though guilt-ridden begin a romance. The film cares less about her disappearance (Anna is never found) than it does about the tasteless romance that developed between her lover and her best friend. It’s Claudia’s hope that this will not be a fleeting adventure, but one that will be her ticket to a higher class. It’s up to the viewer to decide if someone like Sandro is capable of love and commitment.

It’s a slow paced personal film that welcomes tedium as readily as mainstream films welcome action. Antonioni paints a complex picture of decadence, aimless youth and questionable contemporary values. It’s a modern arthouse film that breathes of a visionary’s realistic nihilistic existentialism that brings it a lot closer to the void than other great films of its era and keeps it timeless–a film each new generation must discover on its own. 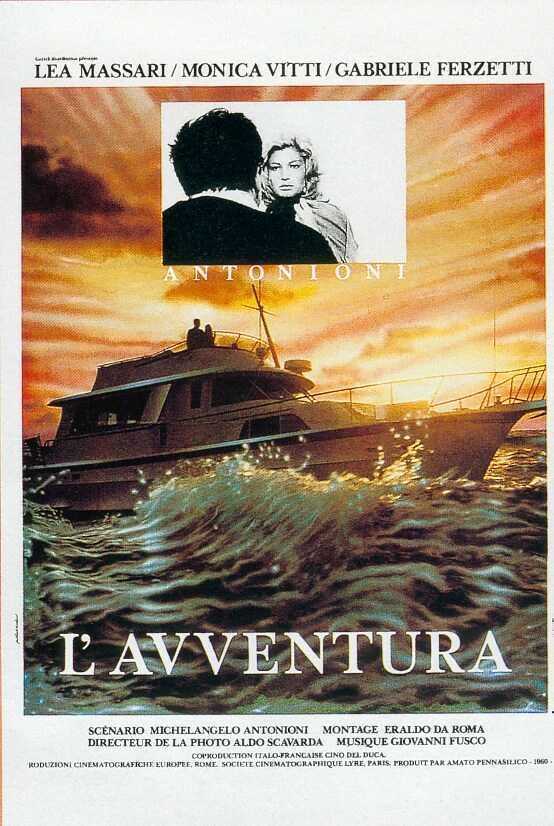