“Too abstract and lacking in a moral compass to be going anywhere that was real.”

The celebrated 73-year-old French director Jean-Luc Godard’s most coherent and least controversial film in a long while might not be his best–the coherence only magnifies how superficial a lot of Godard’s metaphors are when not being veiled in mystery–but it retains his familiar trademark characteristics of non-linear filmmaking, non-stop philosophical non-sequiturs and a bewildering search for truths through a gluttony of dialogue. Notre Musique mixes a visually pleasing narrative fable with an almost documentary-like agenda, as its three-part structure (drawn from Dante’s Divine Comedy) deals with a meditation on the destructive nature of war (mankind’s inherent nature to self-destruct) and a history of the cinema (which makes for an odd pairing and a troubling collage of images to penetrate despite how accessible). This is the filmmaker’s lyrical journey from life-and-death to eternal experiences, and his early bid to say farewell to his influential 50-year movie career without feeling sorry for what he couldn’t accomplish.

The strong first part, a 10-minute segment, deals with Hell, depicted through images of fighting taken from films (ranging from the Holocaust documentary “Night and Fog” to Hollywood Western “Fort Apache”), TV and newsreels. The hour-long middle-part is the heart of the film and is entitled Purgatory, as Godard is back in a still bombed-out Sarajevo for a literary conference, along with a number of real and fictional characters that include the young French-Jewish Tel Aviv-based journalist, Judith Lerner (Sarah Adler), who ends up interviewing and debating Palestinian poet Mahmoud Darwich as he laments about how the world still is not concerned about the lowly Palestinians despite all the publicity they have received. The following characters also pitch in: a troubled Jewish Israeli of Russian descent, Olga (Nade Dieu), who gets a history lesson as she visits the damaged Mostar Bridge in Sarajevo and muses how she’s at odds with her government’s occupation in Gaza and in the West Bank, and two Native Americans who angrily recall their American horror story at the hands of the White Man. A number of characters ruminate about such talking points as the Middle East, terrorism, the Algerian War, Vietnam War, Bosnian War, Iraqi War, leftist ideology and digital technology. In the 10-minute final part, Heaven is pictured as set in the idyllic Swiss lake region, a secure place where a youngster is reading David Goodis’s 1954 novel “Street of No Return” and the pretty young martyred Olga is taking a peaceful stroll through the brightly-lit daytime woods protected by armed members of the U.S. Navy, as in the background a U.S. Marine anthem is played. The last part is the most amusing, as Godard can’t resist taking the U.S. to task for its arrogance into thinking that not only the world is theirs to rule but so is the after-world.

Godard’s film is a strained search for world peace that is conducted without the filmmaker even presuming to know how to find such a reconciliation between the much discussed bitter longtime enemies that fills most of the film– the Israelis and the Palestinians. Instead Godard identifies with the suffering of both foes, recognizing they both have experienced the same hardships and have the same need to stop their fighting. His aims for brotherhood sound like a reasonable thing to hope for, that maybe world unity via globalization (making music the language of the world) is the reasonable way to go, but he doesn’t have enough vinegar in his didactic and too scattered presentation to give one much optimism for his simplistic and naive responses to ever be attainable. The film was too abstract and lacking in a moral compass to be going anywhere that was real. 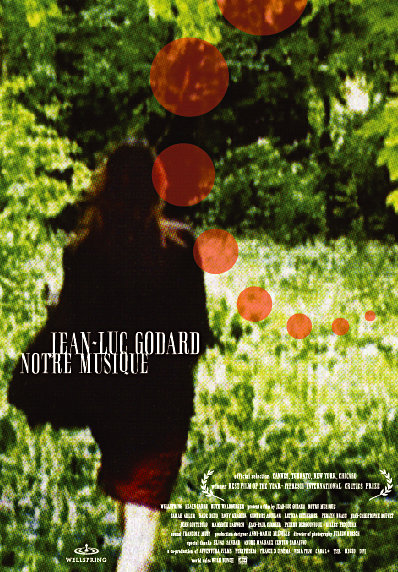