This is the 16th Bond film in the successful series. The theme song is sung by Gladys Knight. Director John Glen (“The Living Daylights”/”Octopussy”/”For Your Eyes Only”) directs it with the usual Bond formula in play of bikini clad hot chicks, gadgets, chases, exotic locations and high-tech special effects, but ups the ante in violence and nastiness and delivers a well-produced slick high-octane action thriller that remains escapist and as entertaining as possible throughout. It’s written by Michael G. Wilson and Richard Maibaum to reflect the changing modern world as a place of selfishness, corruption, greed, violence and a wide-spread use of drugs.

In the Florida Keys, the DEA’s Felix Leiter, on his wedding day, with the help of his special guest James Bond (Timothy Dalton), dramatically arrests a notorious Colombian drug kingpin named Sanchez (Robert Davi) while in the air. But Sanchez escapes while en route to prison with the help of a top DEA official named Killifer (Everett McGill), who was bribed with $2 million. In retaliation Sanchez’s goons throw Leiter to the sharks and return him to his house in critical condition and savagely rape his new bride Della (Priscilla Barnes).

When the Americans do nothing since Sanchez escaped to the fictional Isthmus City, where he owns the biggest bank and casino, and the government’s puppet dictator (Pedro Armendariz) refuses to extradite him, 007 decides to go it alone on a personal vendetta and succeeds in throwing Killifer to the sharks. An angry M (Robert Brown), Bond’s boss, arrives in Florida to tell 007 if he doesn’t report to his next assignment in Turkey that his license to kill will be revoked. Bond accepts that fate and ironically goes on a greater killing spree than ever, as he manages to disrupt Sanchez’s drug-smuggling operation at sea after discovering that the marine company run by Milton Krest (Anthony Zerbe) is smuggling drugs from his Wavekrest ship.

Bond then teams up with feisty CIA contract pilot Pam Bouvier (Carey Lowell), and they fly to Sanchez’s safe haven in Isthmus City. Posing as a wealthy man of action, Bond makes contact with the well-guarded Sanchez in his casino and tries to assassinate him. But fails only because foolishly a top SIS operative named Kwang (Cary-Hiroyuki Tagawa) believes the joint sting operation run by the SIS and Hong Kong Narcotics Bureau operation is onto something big in nailing Sanchez and doesn’t want this assassination to mess it up. Unfortunately for the SIS folks, Sanchez’s army raids their hideout and wipes them out and rescues a tied up Bond in the belief that he’s a rogue British agent and could be of help to their organization.

Bond’s unauthorized mission now calls for him to somehow disarm Sanchez of the four surface-to-air missiles purchased from the Contra rebels that he’s threatening to use to shoot down an American airliner if the DEA will not get off his back.

Things come into place when Sanchez is so pleased with Bond that he invites him to his top secret drug-refining plant that’s hidden in a religious retreat, which also provides TV evangelist programming of a Professor Joe Butcher (Wayne Newton) who auctions off the drugs with the public unaware of this deception. When Bond is identified as an informer by Dario (Benicio Del Toro), one of Sanchez’s vicious henchmen Bond had a previous encounter with–all hell breaks loose. Rather than go quietly Bond sets fire to the drug facility, which brings it to ashes. When Sanchez escapes with tons of cocaine, over $500 million and the four Stinger missiles, Bond gives chase and single-handedly takes down Sanchez and his crime empire in an exciting climax. It has some spectacular action sequences that can take your mind off a shaky story and some muddled plot structure, that is if you’re in the mood for all this hokum and can accept a newer Bond image from his Sean Connery days–one who is more brooding, unpredictable, violent and complex. 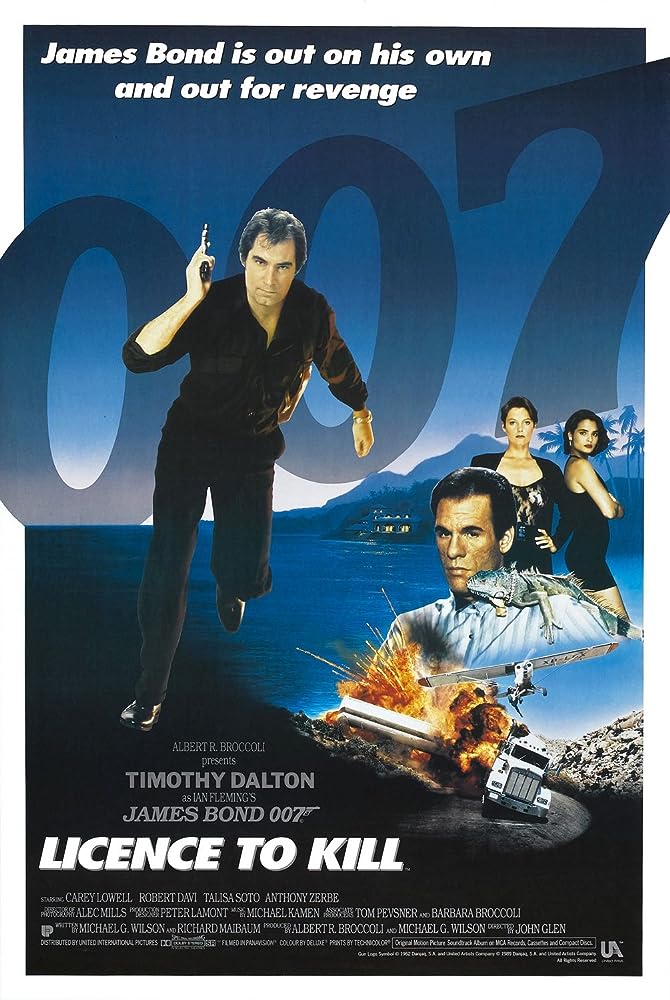