NIGHT AND FOG IN JAPAN (NIHON NO YORU TO KIA)

“Though well-versed in the leftist movement in Japan, it failed to entice me to care about its problems.”

Director Nagisa Oshima(“The Ceremony”/”Cruel Story of Youth”/”The Man Who Put His Will on Film”), a former student protester, co-writes with Toshiro Ishido this stylized didactic political film on the postwar protest movements in Japan, from his leftist prospective. It critiques the futility of the Japanese leftist movement and warns the current student protesters not to make the same mistakes. The early fictionalized Oshima film, a follow-up to his slum film “The Sun’s Burial,” is hard-hitting but tedious and made before he found his more energetic style of film-making. The title is lifted from the more powerful Holocaust essay documentary of Alain Resnais (1955), who maintained that the fog of guilt and memory blurred the crimes against humanity. “Night” anticipates Godard’s later political Maoist harangues, but they had comic pauses to at least give the viewer a few laughs between its serious messages.

The pic covers in an acerbic way the aftermath of the ratification of the second U.S.-Japan Security Treaty (Anpo) in 1960, and how the radicals had the backing of all classes in the country and still failed to stop its passage. It opens with the marriage offormer activist in the student movement turned field reporter Nozawa (Fumio Watanabe) to the younger current student protester Reiko (Miyuki Kuwano). The bride has been injured during a recent student street protest opposing the treaty’s further enactment. Controversy is stirred up by a pair of vocal wedding crashers, who have been hiding from the police and accuse the Communist wedding guests of not caring about the disappearance of two of their members–Reiko’s friend she brought into the movement named Kitami (Ajioka Toru) and Nozawa’s supposedly dead comrade Takao (Sakonji Hiroshi).

The gist of the film examines all the internal strife under the older radical members, that includes the group’s authoritarian leader, Nakayama (Yoshizawa Takao), causing friction over his insensitive actions and how the movement is modeled after a totalitarian structure that apes Stalinist postwar Communism. The result is that the new wave of young protesters have no role models to turn to and the various flaws of the movement’s structure have rendered it dysfunctional. Oshima relates in metaphorical terms its failures to a love affair that fizzles out and is inert, as it continues making the same mistakes without changing its ways. Its failures to change leaders who fail signals it has made idealistic compromises that have rendered the movement useless.

Though well-versed in the leftist movement in Japan, it failed to entice me to care about its problems. 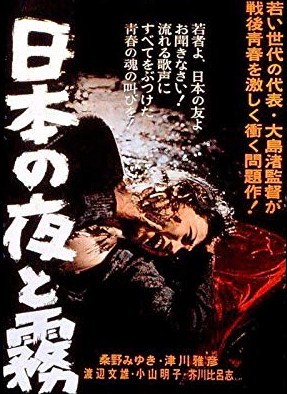