“This is a strong film in many ways even if it’s not a great one.”

Woody Allen (“Scoop”/”Melinda and Melinda”/”Match Point”) helms this spirited but dark romantic comedy about desire dominating love life. It’s served with a continuous unseen narration by the actor Christopher Evan Welch (Woody’s alter ego), offers some keen insights into the psyches of cliched young American lovers and hot-blooded Latin lovers, creates a stunningly beautiful arty atmosphere due to its romantically idyllic location shots (those colorful back alleys of Barcelona, the famed pedestrian walkway called Las Ramblas, the enchanting Gaudi buildings and the brilliant Miro sculptures are tourist guide material but well-worth seeing) and the stars give good probing performances (especially energetic are the two Spaniards). Its cynical take on relationships is all Woody, as he shines his light on a cast of characters who for the most part are not happy in their relationships (at least all the females are not happy).

Twentysomething American post-graduate best friends, Vicky (Rebecca Hall, newcomer English actress and daughter of noted British theatre titan Peter Hall) and blonde bombshell Cristina (Scarlett Johansson), take a summer holiday in Barcelona, as the promiscuous, flighty, free-thinker Cristina, someone who only knows what she doesn’t want and not what she wants, is getting over a romantic breakup while the sensible and straightforward engaged Vicky, someone who knows exactly what she wants, has a chance to soak up first-hand Catalan culture–the subject of her graduate thesis is Catalan identity. The friends are opposites in personality, disposition and values. Cristina has just finished a short film made in college and believes her artistic temperament means there’s an artistic talent lurking somewhere inside her that will determine which art discipline will be best suited for her, which she hopes to find on this trip. The scholarly and levelheaded Vicky’s happily engaged to dull nice guy corporate executive Doug (Chris Messina), who is materialistic, more interested in golf than art, and has a great house picked out for them in Bedford Hills.

Vicky’s relative, Judy Nash (Patricia Clarkson), lives in a ritzy Barcelona villa with her financier husband, Mark (Kevin Dunn), and invites the girls to spend the summer with them. While the Nash’s are taking the girls to a gallery party, Cristina becomes attracted to controversial womanizing celebrated artist Juan Antonio Gonzalez (Javier Bardem) who is in attendance. Juan made the newspaper headlines over a violent row he had with his ex-wife Maria Elena (Penélope Cruz), as they are involved in a complex love-hate emotional relationship (he can’t live with her or without her). Later at a restaurant Juan introduces himself to the girls by proposing a menage a trois in northern Spain’s Oviedo for the weekend, with him flying them there in his own plane. It intrigues Cristina but repulses Vicky. It results oddly enough in the artist having a one-night stand with Vicky and back in Barcelona Cristina moving in with him. Later the unstable Maria Elena will live there with Jose and Cristina, and the student will experiment sexually with his wife.

By the end of the summer Vicky has to rethink if she wants to live such a staid life with the uninteresting but trustworthy Doug, while Cristina has to examine if her free-love bohemian lifestyle is really what she wants. Also the cocky stud Jose is exposed as having some hidden insecurity problems, while the talented artist Maria Elena has an uncontrollable rage that keeps her at all times one-step away from losing it.

This is a strong film in many ways even if it’s not a great one–the dialogue is so banal and its ambiguous ending is more a result of Woody’s lazy writing style than a clever way of answering things that can’t be answered. Also it can’t reach a delightful level of Almodóvar perversity or a Bergman sense of intellectual angst or, for that matter, answer the questions it raises relating to love and romance; but it achieves a credibility by presenting its troubled relationships in simplistic measured ways that make the flawed characters seem like real people (I even bought into Cruz as an artist, as she gives her best performance in an American film). It’s one of Woody’s more entertaining recent films, and it comes at a time when many thought the seventysomething was losing it as a filmmaker. 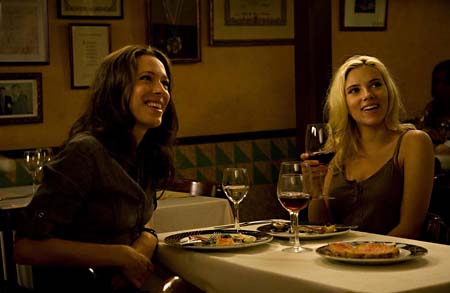