The throwback film to the Nancy Drew series of the 1930s comes off surprisingly fresh and enjoyable, thanks to the skillful writing job of Tiffany Paulsen and Andrew Fleming. They manage to tweak the Nancy Drew character that Carolyn Keene created just enough so she still retains her sweet innocence but can fit into the modern world quite nicely to face boorish teenagers and violent thugs (Keene was a pseudonym used for a group of writers hired by the Stratemeyer Syndicate, who created the series). The international bestselling books sold over 200 million copies, to give one a hint at how popular the Nancy Drew character is around the world. Director Andrew Fleming (“The Craft”/ “Threesome”/ “Dick”) does a terrific job keeping it moving along at a snappy pace and retaining some worthwhile old-fashioned traits (at least from an adult viewpoint) that seem to be in short supply in the modern world like courtesy, being non-judgmental and being a good citizen. Nancy is the popular teenage sleuth that influenced many of the females of her generation to be more liberated and, believe it or not, was a forerunner to feminism.

The inspired casting of Emma Roberts (Julia’s niece) as the spunky, goody-two-shoes, know-it-all Nancy is, perhaps, the film’s greatest asset. Nancy is transformed from the way Bonita Granville played her as a ditzy forever 16-year-old. The film’s wry humor, which many in the multiplexes might not get or like, is derived from Emma playing her character without irony: an eternal optimist who might be perceived as so normal, in an old-fashioned sense, that she’s really anything but normal to those she encounters in the fast track mindless world of Hollywood High School or in the target audience.

The straight-laced, super achiever Nancy’s geeky, widowed father Carson (Tate Donovan) is a workaholic lawyer who is slightly clueless but still has enough sense not to be totally clueless. He gets a chance to make big money working for several months in Hollywood and the two leave their Hollywood version of a quaint, conservative small-town called River Heights to live in a Hollywood version of a glitzy, multi-cultural, bad-ass and overly fashion-conscious Hollywood. Dad has Nancy promise to give up sleuthing and as a reward allows her to choose which house to rent. She chooses an old mansion that was once owned by a famous actress named Dehlia Draycott (Laura Elena Harring), who after she mysteriously disappeared for five months was found dead, face down, in the mansion’s pool 25 years ago and her murder was never solved.

Nancy’s sleuthing takes her to the Hollywood movie studio where Dehlia worked; to Chinatown; to high school classes with two cruel Valley-girl types, Inga (Daniella Monet) and Trish (Kelly Vitz); to track down Jane Brighton (Rachael Leigh Cook), Dehlia’s unaware lovechild; to befriend the mansion’s secretive elderly caretaker Bob Leshing (Marshall Bell); and to face off with the arrogant Hollywood super-agent and attorney for Dehlia’s estate, Biedermeyer (Barry Bostwick). The last two also worked for Dehlia, in the same capacity, and have reasons to be concerned with Nancy’s snooping.

Helping Nancy navigate the mean streets of LA is an obese, diminutive, clownish 12-year-old named Corky (Josh Flitter), who has romantic designs on Nancy and, though, some might find him annoying, he nevertheless has the film’s best comic lines and moves. Also making an LA appearance is Nancy’s appealing square boyfriend, Ned (Max Thieriot), from her hometown, who came by to deliver her blue Nash roadster convertible and though he’s smitten by her doesn’t know how to make a move to show her how much he cares.

The playful film rejoices in Nancy’s smartness and her retro look of wearing penny loafers and dweeby dresses (she sews her dresses from the same patterns her mom used). In the end, she not only cracks the case in her own inimitable style, but her dress code is found fashionable, even by the Mean Girls, as it’s called in a ‘zine article “the new sincere.” For that matter, the pic gets over because Nancy and the story also are sincere, even if we might find her a bit obnoxious (refusing to go over the speed limit when chasing a baddie was a bit much, as was lecturing the high school principal on what food to serve in the school cafeteria); but she knows how to surf the net, always has a sleuthing kit handy in her handbag, and while always polite she can stick it in the face of those who don’t get that she’s for real (as is the movie). 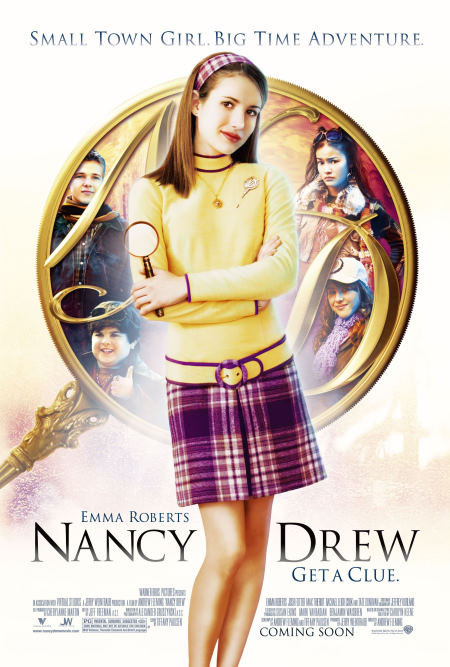