Polish-born Pawel Pawlikowski’s (“Last Resort”) engaging arthouse coming-of-age drama was the winner of the British Academy Film Award for Best Film. It charts the summer friendship and romance between two troubled young girls from the opposite side of the tracks in the isolated West Yorkshire countryside. Red-headed Mona (Natalie Press) is an uneducated 16-year-old feisty tomboy from a working-class family; chic Tamsin (Emily Blunt) is a cynical, cultured, spoiled, teenager from a wealthy family. The only things they have in common are that both families are dysfunctional, they are bored, frustrated, neglected and searching for love. The evocative drama is based on a novel by Helen Cross that has been adapted for the screen by Michael Wynne and Mr. Pawlikowski.

Tamsin returns home in the summer after being expelled temporarily from boarding school as a bad influence on the other girls. While horseback riding on her white thoroughbred (suggesting she’s a knight in shining armor who saves lives) she meets Mona sunning herself in the field and chats her up. The depressed Mona lives in a room upstairs from the pub, named the Swan, that her deceased mom owned. She resides with her brother Phil (Paddy Considine), who was just released from prison for armed robbery and while inside became a born-again Christian. He is in the process of building a huge cross to erect on top of a hill overlooking the valley and changing the pub into a temple where his fellow Christians can hold prayer meetings, and prays daily for Jesus’s help so he can give up the violent ways of his past and stop sis from being a sinner. Mona never knew her dad and has been aimless since her mom died of cancer. Her future looks bleak, her current situation seems futile as she was just dumped by her married boorish boyfriend Rick (Dean Andrews) and tries to ride around the countryside on a Honda moped that is motorless because she can’t afford to buy one. She no longer can confide in her preachy dogmatic brother who only wants to convert her. Tamsin is also going through a rough time. To comfort herself she plays The Swan by Camille Saint-Saëns, takes an intellectual delight that Nietzsche said God was dead and relates to the knowledge that Edith Piaf had three husbands who mysteriously died–the last one a boxer she killed in a moment of passion but received no jail time because France excuses crimes of passion. Tamsin relates that her older sister Sadie died from anorexia, her father is preoccupied boffing his bimbo secretary behind her mom’s back, and absentee mom keeps busy with her actress projects. With no one to confide in, the privileged girl doesn’t know how to handle her privileged life.

Out of frustration, curiosity and a need for some warmth, the girls get it on in a steamy love affair. But by the summer’s end, as expected, things go wrong and the girls will be driven apart.

This carefully observed modest story rings true in its affecting moody setting and is boiling over with ambiguous moral questions that remain unresolved about class, spiritual, cultural and sexual matters. Though on a simple basis it’s about the doomed summer relationship between opposites, on a greater scale it’s about getting grounded in something to believe in and puncturing holes in childlike self-delusional fantasies.

Both Natalie Press and Emily Blunt, unknown actresses in America, give dazzling subtle performances that nail down their characters in an image breaking way. 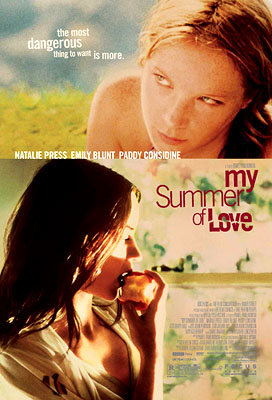