“The beauty is in the raw performance by Sims-Fewer.”

It is the gripping feature film debut of Dusty Mancinelli & Madeleine Sims-Fewer, directors/writers, who have collaborated on several short films prior to doing so again for this shocking rape/revenge drama. Unlike the similar themed 1978 Meir Zarchi thriller “I Spit On Your Grave” and the 1981 Abel Ferrara “Ms .45,” this film aims to be more a psychological art film than the other more exploitative revenge films.

The flawed character of Miriam (Madeleine Sims-Fewer, also co writer/director) and her husband Caleb (Obi Abili, 21 Bridges) bicker all the time in a rocky marriage. Miriam thereby for some reason returns for a weekend visit to her hometown lakeside cabin in rural Quebec to spend some time with her rival estranged younger sister Greta (Anna Maguireand and her handsome but chatty worthless husband Dylan (Jesse LaVercombe). The three have known each other from childhood.

The hard-pressed Miriam confides in her marital problems to Dylan (Jesse LaVercombe), and wakes up the next morning to find him raping her after a boozy night spent by the house campfire. Feeling soiled and humiliated by the rape, she seeks revenge and invites him into the woods for what he believes to be another sexual romp but is instead Miriam’s chance for revenge.

Miriam’s loveless marriage hurts and she’s jealous watching her sis openly flirt with her playful but unreliable hubby, which leaves her feeling cold. The nature photography by Adam Crosby of such cruelties in nature as a wolf wolfing down a rabbit, reflect the brutality of the world that Miriam feels.

The film overcomes some shaky camerawork (some scenes are a tough watch because of it) and illogical non-linear gaps in its storytelling, to come up with a decent revenge film. The beauty is in the raw performance by Sims-Fewer, who reveals how violated and traumatized she feels that she can’t stop her premeditated act of violence because she’s reached her tipping point. 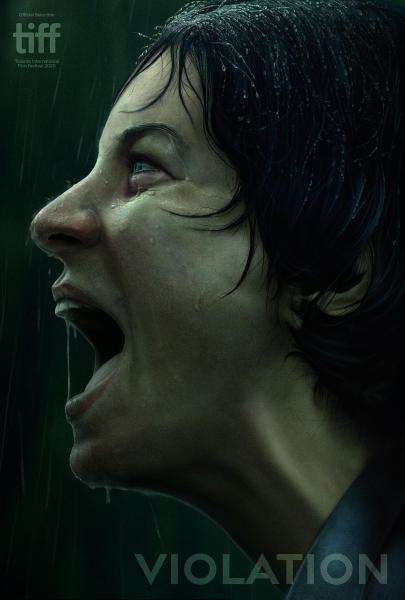