Warner Brothers puts together a big budget Western to compete against the other studios with the resurgence of Westerns like Stagecoach and Destry Rides Again during 1939. Lloyd Bacon service-ably directs from a messy script by Robert Buckner, Warren B. Duff and Edward E. Paramore. It’s based on the story by Wally Klein & Mr. Paramore. James Wong Howe handles the luminous black-and-white photography, the only thing about the film worth taking notice of. James Cagney as the knavish The Oklahoma Kid and Humphrey Bogart as the heavy desperado Whip McCord seem like ducks out of water in this Western setting, as the Warner Brothers wardrobe department supplies Cagney with a cool buckskin jacket while Bogie shuns his fancy urban suits to be clad all-in black. This B Western with an A cast never becomes more than a B Western. It tries for the usual routine tale of a one-dimensional baddie making a fool of the law to prosper until he gets his comeuppance; it tries to juice up the trite story with some comic antics by having the amiable Cagney, the hero, be sort of like a Robin Hood outlaw (only stealing from the bad guys). Cagney even sings two songs “Rockabye Baby” and “I Don’t Want to Play in Your Yard” (ugh!).

It’s set in 1893 in the Cherokee Strip, after President Grover Cleveland signs a proclamation that pays the Indians for their land so the white settlers can have a “land grab.” It then shows McCord’s gang stealing the newly minted money intended to pay the Indians for their land; but soon a smirking Oklahoma Kid steals it from the gang by ambushing them. The next morning the honest John Kincaid (Hugh Sothern) and his upright son Ned (Harvey Stephens), representing the leading citizens of the new Oklahoma Territory, try to stake out a plot of land on the first day of the land rush, but the villainous Whip McCord and his gang get there first by cheating. McCord makes a deal with the good citizens to let them build their town on that choice spot, which turns out to be Tulsa, if he’s given a grant to run a saloon. A few years later McCord ends up running this corrupt and wild town by having the law bought off.

The only ones willing to stand up to McCord are honest Judge Hardwick (Donald Crisp) and the Kincaids. Ned is dating the judge’s daughter Jane (Rosemary Lane), but she keeps putting off his requests to marry even though he seems to be everything she wants in a dude.

McCord feels threatened when John Kincaid runs for mayor, promising to cleanup the town, and Ned for sheriff, and arranges with his henchmen to frame John on a murder charge. The crime boss tricks Judge Hardwick to leave town before the trial and moves up the trial with crooked judge Morgan presiding. After John is convicted, it’s learned that the wanted outlaw named The Oklahoma Kid is John’s estranged son. McCord gets his thugs to rile up the crowd and they break into jail and lynch John. The Oklahoma Kid has enough with the failings of the justice system and guns down all those responsible for causing his father’s death and leaves one gang member, Doolin, barely alive but well enough to point the finger at McCord as the man behind the murders. This leads to a fist fight in McCord’s saloon between the two two superstars and the convenient death of Ned at the hands of McCord. With the fall of McCord and death of Ned, Cagney can now marry Lane and presume that there’s a return to justice and no need anymore for his vigilante style of law-and-order.

Though certainly competently made, it still left me unsatisfied and scratching my head on its take on law-and-order (it can only be enforced by brave men willing to use their guns even if not always sanctioned to). Everything but the photography seemed fuzzy, misplaced and ill-fitting. 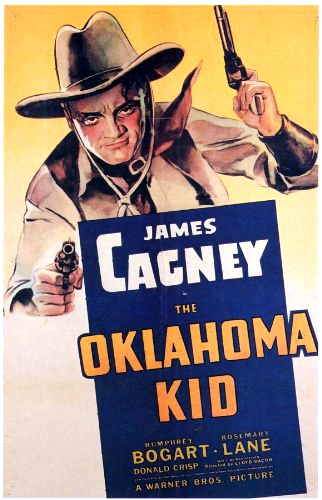