MURDER ON THE BLACKBOARD

Follow-up to the hit comedy crime drama The Penguin Pool Murder, again helmed by B film director George Archainbaud(“Fool’s Gold”/”Alaska”/”Mystery Man”) and the murder solved by a schoolmarm hilariously played by Edna May Oliver. Only this one is not as good–too much of the comedy seems forced. It’s adapted by writer Willis Goldbeck from the story in Murder Mysteries magazine by Stuart Palmer. The crime story is weak, but the banter between the prim single elementary school Hildegarde Withers (Edna May Oliver) and the hardboiled NYPD police inspector Oscar Piper (James Gleason) is a hoot, as she disses the cops as morons at every opportunity. The dim-witted cop’s best investigation strategy is to try and bully a confession out of his suspects by telling them “Come clean now, or we’ll let the boys go to work on you.”

Third-grade music teacher Louise Halloran (Barbara Fritchie) is slain in the cloak-room of her Manhattan elementary school when classes end and her body is discovered by Miss Withers, who again calls Inspector Oscar Piper to investigate and proudly reminds him her detective work solved The Penguin Pool Murder. When Hildegarde takes the cigar chomping inspector to the corpse, it has disappeared. The cops and Hildegarde search the empty school for the corpse and murderer. The amateur sleuth finds musical notes on the slain teacher’s blackboard that she’s sure are valuable clues, and tries throughout to whistle the tune. Meanwhile Sgt. Donahue (Edgar Kennedy) is searching the dark basement and gets knocked unconscious, and recovers in the hospital but still can’t recall who slugged him until after the case is solved.

The suspects include the incompetent slovenly drunk janitor Otto (Frederik Vogeding) and fellow teachers Addison Stevens (Bruce Cabot) and Jane Davis (Gertrude Michael), and the skirt chasing principal (Tully Marshall). The cops believe the janitor did it, but Hildegarde believes it was either the victim’s roommate Jane or shop teacher/assistant principal Addison, who was secretly involved with Louise over the summer vacation until his recent romance with Jane. 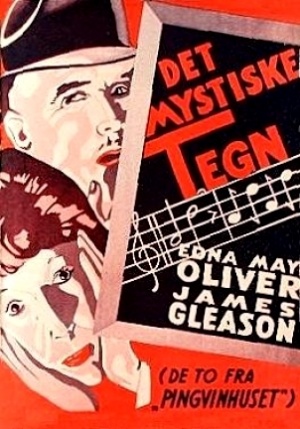