MOLOKAI: THE STORY OF FATHER DAMIEN

It is hard for me to believe that one of the world’s greatest directors and one of my favorites, Paul Cox (Lonely Hearts/My First Wife/Man of Flowers/Cactus/A Woman’s Tale), made a film that was so saintly that it seemed to be without dramatic effect or chinks in its pious armor. This is not a commercial film, nor one that tends to compromise its serious tone in order to become more entertaining. It is a true story that tries not to flinch from the suffering it presents and from the altruistic virtues of the dedicated priest it glorifies, who is only interested in comforting those shunned by society because of leprosy. It eschews the tricks of filmmaking in its presentation of such an important but morbid subject, but does so to its detriment. There is no bend. It is about suffering and a Christ-like figure who gives up his life to help those who are helpless, something the 59-year-old, Dutch-born, NYU film school graduate, and now Austrialian citizen, has become obsessively interested in observing in his later films. His first films were mainly interested in the behavior of eccentrics and in quirky comedy plot lines revolving around the theme of loneliness.

In this beautifully shot film on the island of Kalaupapahe, catching the lushness of the Hawaiian islands, Cox has taken the subject matter of suffering to a new degree of intensity and requires the viewer to be either fully absorbed or else it would be impossible to feel anything about such a miserable topic as 19th-century leprosy (Hansen’s disease). There is medicine for treating leprosy as of 1940, but the undeveloped countries still can’t afford that medicine–so the disease is still untreated and remains a modern problem in such untreated areas.

To sit through this film, is like passing a qualifying test to join the order Mother Theresa founded in Calcutta among the untouchables. It is a dry, religious-inspirational film about someone who was recently canonized, Father Damien (David Wenham). The priest is railing against wooden villains, those authorities in the Catholic Church (such as Derek Jacobi) and those politicians in the government (such as Sam Neil), who not only refused to help but tried to block him from helping those in need. He is a sober man without a rich personality or a sense of humor who unquestionably believes in God, in miracles, in piety, and in his own honest to goodness self-righteousness. He’s a good man, a noble and altruistic man, but one we can’t get to know as a human being. We see him only through the cause he dedicates his life to. And as brilliant a study as this is, taking on such a difficult subject, this brilliance fails to amount to anything more than being a history lesson about Hawaii and about those banished to die alone from that disease on an abandoned Hawaiian island called Molokai.

All that is known about Father Damien comes in the form of a prayer, before he first goes to the island he says: I begin my life at 33, Lord, and you died at 33.

Father Damien is a Belgian missionary who volunteered in 1872 to set up a church for the lepers of Molokai and who ended up doing everything humanely possible to make life bearable for those suffering from that disease.

Father Damien is warned by Bishop Maigret (Leo McKern), the one in charge of the island’s church matters, to not touch the lepers or else he will catch their disease. Upon landing on this God forsaken island he is touched by the thousand lepers there of all ages who are in various degrees of suffering without beds, a hospital, proper food, medicine, houses, or the most basic human means of existing. He is so touched by this that the first leper he sees, who is a child, he not only touches but embraces.

Taking charge of the island, the priest teaches the inhabitants to grow their own crops and to live with dignity, as he fights the battle to get medical facilities and lumber to build houses; and, most of all, he wants nuns to come to this quarantined island, where once you come to live here you can’t leave.

Unfortunately, the storytelling remains flat despite the superb character performance by the Australian David Wenham. In one scene, the most dramatic one in the film, lepers are tossed off the boat docked on the island’s harbor and many of them drown. It is a scene of immense cruelty, but seems to have happened as if it were a dream — not much is made of it and the film just continues on without giving pause to that event. The film just couldn’t say more about the priest except that he made conditions better, converted many to Catholicism, and contacted the disease and died. The priest was relieved to know that the nuns have come at last and that there is another priest to carry on the work. These are amazing accomplishments in the real world, but I’m afraid they are not dramatic enough to energize this film.

Peter O’Toole has a cameo as a glum English Protestant leper, who is in the dying stages of the illness and is cynical of the priest’s efforts; but, nonetheless, admires his tenacity. Sam Neill is saddled with the stiff villainous role of the alcoholic and mean-spirited prime minister of Hawaii and he can’t do much with that role except stiffly act the part of a prig. Derek Jacobi is the other arch villain, an assistant to the bishop, who doesn’t do much but try to make Father Damien look bad so that the church will look upon him with suspicion. It’s a role that doesn’t make the best use of this very talented thespian. Kris Kristofferson has an unimportant role as a Lutheran businessman befriending the priest and giving him sound business advice. Kris is a merchant profiting from the island but seems to be a fair-minded person who knows his limits and who speaks in some indecipherable accent– probably German.

The film had a chance to mention that the diseases contacted by the natives were brought to the island by the European settlers, but chooses not to go down that road.

I felt anguished about all the piety, but the film despite all its obvious flaws lingered with me for a long time afterwards and I’m not quite sure why. That is why I liked it better afterwards when the film had a chance to sink in, than I did when first watching it. It’s a tough film to enjoy and I’m not sure I learned anything about suffering, that is if I was supposed to, but I do think I saw someone who I believe is an actual saint and he was a spellbinding figure despite being so unapproachable. I am glad I saw it, even if I was not entertained. 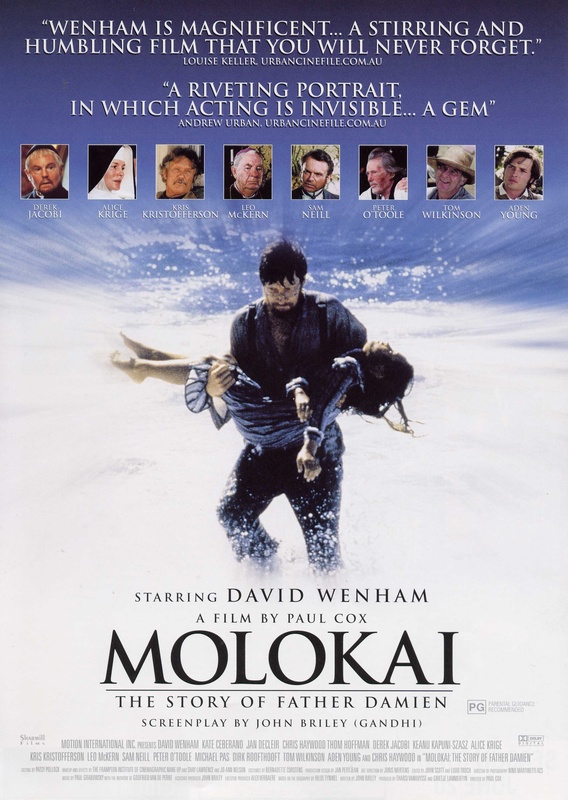