Robert Aldrich (“The Legend of Lylah Clare”/”What Ever Happened To Baby Jane?”) directs this intelligent noirish melodrama, a stinging film on Hollywood’s studio system that’s based on a play by Clifford Odets. Jack Palance plays the role that John Garfield played on the Broadway stage. The film did not have a good box office according to Aldrich because the public never felt sympathetic to Palance’s character and Palance himself didn’t have matinee star good looks to make his part believable as a Hollywood star. No major studio would make this expose on Tinseltown, so it was made by United Artists on a low-budget and shot in 16 days. The film’s major obstacle to overcome was in how wordy and stagebound it was, and how to stage Odet’s argument of Art vs. Mammon with the realization the film itself was being made in Hollywood. Aldrich succeeds by altering Odet’s theme slightly without losing his essential meaning. The movie stresses that the struggle is a personal one over survival and redemption rather than idealism, which allows the sparks to fly among the disagreeable leading characters as they trade lines only an insider could pen. The masterful performance by Palance as the tormented artist defies the clichés of his insulated and self-absorbed character. He expresses all his anguish and hurt in the star system he willingly signed on for to reap the benefits of the rewards, and shows the futility that boggles his mind to the point he doesn’t realize when he’s acting or speaking for real. It was shocking when first released in 1955 but is now considered tame by modern standards.

Charlie Castle (Jack Palance) is a Hollywood success story. The star movie actor, a former Broadway actor, is living in opulence in Bel-Aire, a suburb of Hollywood. But he has problems that relate to his work that he can’t cope with. To become a movie star he had to sell out his ideals, but his problem is that he can’t forget those dreams. His marriage to Marion (Ida Lupino) is shaky and they are currently separated. Marion swears she will divorce him for sure if he inks a new seven-year contract with the evil studio head Stanley Hoff (Rod Steiger), who only knows how to make inferior films. Stanley hams it up in a role where star and boss hate each other to the point they are constantly insulting each other. The fictional studio boss is a mixture of real studio bosses Harry Cohn and Louis B. Mayer combined in one person.

Marion resents that her hubby has become a weak man succumbing to the pressures of inferior men who offer him material temptations, and that he has lost his way by becoming a womanizer and an alcoholic. When Charlie refuses to sign a new contract, his self-aggrandized bully boss Stanley and his unctuous assistant Smiley Coy (Wendell Corey) pay him a house call to blackmail him over a previous tragic car accident incident which if revealed could end his career. Charlie’s agent Nat (Everett Sloane) acts as a buffer between the big boys and Charlie, trying to cut a deal his client could live with.

Charlie capitulates and signs. But things don’t end there, as there was a blabbermouth actress named Dixie Evans (Shelley Winters) who was in the car when the drunk Charlie ran over the child–something press agent Buddy Bliss took the blame for and received a 10-month jail sentence. Smiley earns his rotten paycheck by scheming how to eliminate Dixie so the studio’s hot property would not be devalued, as Smiley comes up with a plan involving Charlie to get her drunk and then letting his hired boys push her in front of incoming traffic. This proves to be too much for Charlie, who decides he just wants to reconcile with Marion and his 7-year-old son Billy, and has grown tired of all the leeches and parasites that inhabit his narrow claustrophobic world. The question becomes if it is too late for Charlie to return to his ideals. 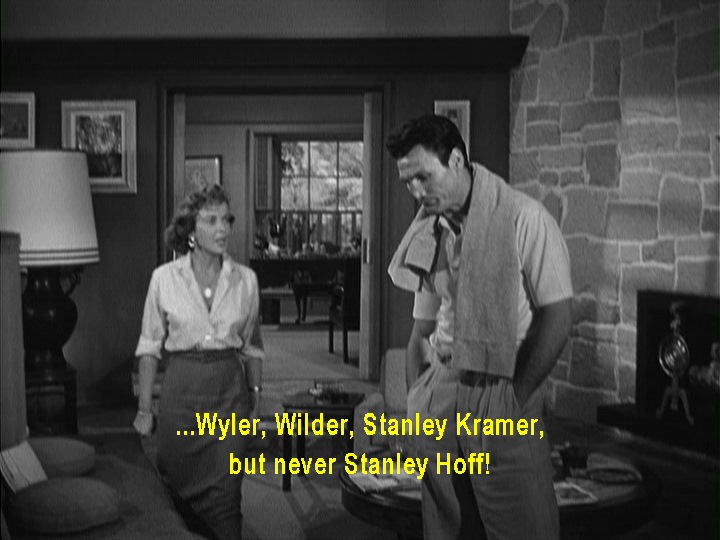