An unremarkable drama, featuring Alan Ladd as a struggling artist and Carolyn Jones as his mentally disturbed alcoholic wife. Ladd speaks in a laconic monotone voice, while Jones is shrill and unappealing. Besides the dullness of the story, it seemed far-fetched. The weakest point of the film is the unlikely ending where those who framed the artist for murdering his wife, so easily confess their guilt. It seemed as if the film ran out of oxygen and just wanted to end.

John Hamilton (Ladd) has quit his NYC job as head of an art department to live in the small community of Stoneville. He hates the rich people who live here, but loves very much 5 kids who play together in the wooded park where he paints. They are the postal worker’s two kids — Emily and Angel; the black servant’s son, Leroy; the sheriff’s son Buck; and, the son of one of the wealthy citizens, Timmy. John has painted the kids at play, and has called his painting ‘Angels in the Woods.’

His wife Linda (Jones) is upset with him for living in the ‘sticks,’ as she wants to get back to the action in NYC. But he has moved here because of her nervous breakdown in NYC and because she’s an alcoholic. His wish is to get away from the rat-race and pursue his career as a painter in this country setting. When he refuses an offer to go back and work in NYC for double his previous salary, Linda becomes agitated. She mocks him that his art show was panned by the critics.

At a birthday party for Vickey Carey (Brewster), John is forced to go alone because his wife has a migraine. Vickey is warm to him, but the others treat him with disrespect. Vicki’s husband Brad (Lupton) is a weakling, bullied by his overbearing father (John Alexander). Gordon Moreland is a snob, and the others are not the type of people John likes.

John’s problem comes when he returns from a visit to NYC to see the boss who offered him the job, and he finds his wife missing and his house wrecked. He also believes his wife has a secret lover. Sheriff Steve Ritter (McGraw) investigates, he is someone who doesn’t like the artist and is attracted to Linda. He believes John murdered her, as they soon find Linda’s body buried in the yard and they trace an order John made to buy cement. An order John knows he didn’t make.

John has been framed for murdering his wife; and, as the hostile town forms a vigilante mob to go after him, the 5 kids hide him in the woods and help him lay a trap for the real killer.

The drama never had much of an impact, and the story seemed silly and misplaced. It over sentimentalized the children and made the adults into wooden caricatures of evil. Ladd seemed miscast as an artist, while Jones failed to be convincing in her role as a neurotic. 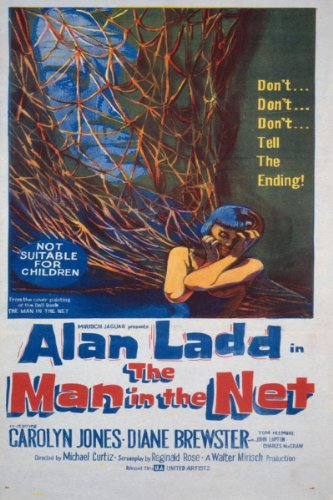