LORD OF THE FLIES

It’s based on the classic 1954 novel by William Golding, and written and directed by Peter Brooks. It manages to keep intact Golding’s powerful allegory about the breakdown of civilization when all the chips are on the line. Shot in black-and-white and on a shoestring budget, the production values are crude and the acting from the child cast of non-professionals is amateurish, but the film nevertheless sparkles with raw intensity and gets around its primitive dramatics and lack of a coherent script by looking much like a documentary.

After a plane crash a group of English schoolboys aged 10-to-12, who were flown out of the country to avoid a nuclear attack, find themselves on a deserted tropical island (filmed in Puerto Rico’s Vieques Island during the schoolchildren’s summer recess) and have to fend for themselves. At first the boys enjoy the adventure and their new found freedom, but soon they discard their uniformed suits and ties and go native. Things degenerate to tribal strife based on class differences, as the public school boys led by the beastly Jack become hunters and flaunt their physical prowess while the private school upper-class boys lose their grip of stable leadership under the noble Ralph, who was at first elected leader until usurped by Jack, and are dominated by Jack’s hunter boys. During all the savagery, Ralph always remains rational and never loses his dignity. The most tragic figure is Piggy, the voice of British middle-class values, someone Jack detests because of his obesity, specs and adult manner of speaking down to him. Piggy has his glasses broken by Jack and will later be killed by him. The frightening scenes of these previous ultra-civilized schoolboys losing it and forming marauding bands with pointed wooden sticks as weapons as they savagely shout “Kill the beast,” gives the film its maddening impetus. It clearly, in an unsettling way, brings out Darwin’s theory of “the survival of the fittest” to its darkest light. 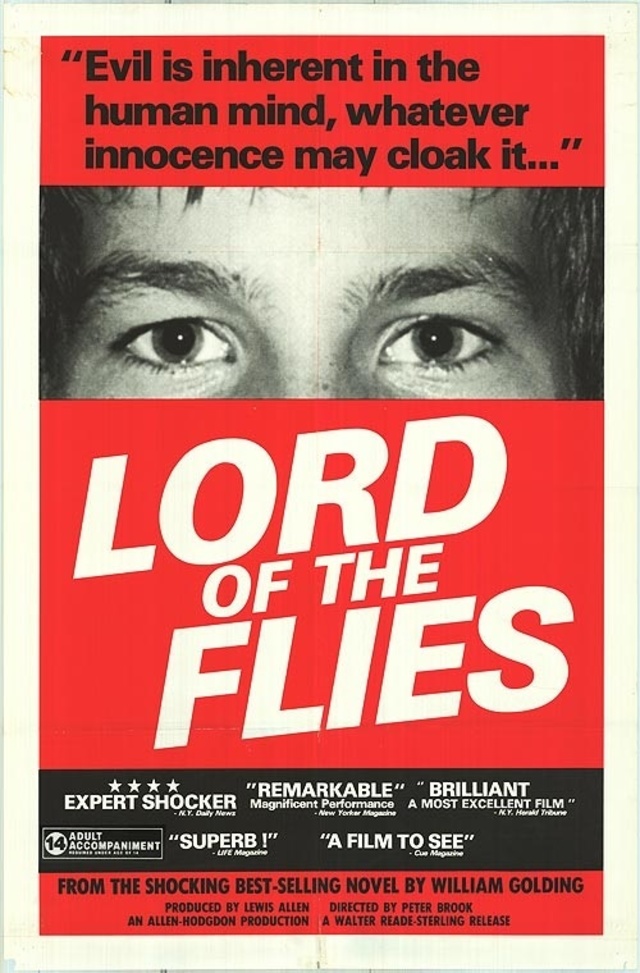