“This is Sam Peckinpah’s masterpiece.”

This is Sam Peckinpah’s masterpiece. The ultimate in violent Westerns, filled with clichés and violence drawn to extremes. In Peckinpah’s rugged masculine world, brutality (adulthood) and innocence (children) co-exist. The opening scene highlights Peckinpah’s theme of man’s inherent violent nature from childhood and points to the bloodshed that will come in the film’s payoff, as he shows a bunch of Mexican children poking a stick at a writhing scorpion being devoured by killer ants and of them laughing as they watch. This is witnessed by a gang of outlaws on their way to a brutal robbery.

A band of soldiers led by Pike Bishop (Holden) and his right-hand man Dutch Engstrom (Ernest Borgnine) by his side, ride into town by horse in a military manner. They are not really soldiers, but they are in this dusty South Texas border town dressed that way to rob the railroad office of its gold. The only problem is that they are being set-up for an ambush, arranged by a particularly despicable railroad magnate named Harrigan (Dekker).

Things start to go wrong immediately. There are ambushers awaiting on the roof of the building across from the railroad office, who are led by Deke Thornton (Robert Ryan). His low-life bounty hunters get on the nerve of the professional gunman by pointing their rifles upward in sight of the street. Thornton once rode with Pike’s gang but he felt that Pike betrayed him through his carelessness which resulted in his arrest, and he now sees this assignment as both a chance to get revenge and to be free from his prison term. Thornton has a deal with Harrigan that if he brings Pike and his gang in, he will be released from prison. He has given his word that he will get Pike, and his word is all that is needed as a bond that he will not run away.

Pike’s men soon see the glint of the rifles on the roof and prepare for a fast escape. To make matters more complicated, a Temperance Union meeting just breaks up and they are marching in front of the robbery scene. The seven men trapped in the railroad office are Pike and Dutch, the brothers Lyle Gorch (Warren Oates) and Tector Gorch (Ben Johnson), a Mexican just taken into the gang, Angel (Jaime Sánchez), Crazy Lee (Bo Hopkins), Buck (Rayford Barnes) and Abe. The gang uses the marchers, consisting largely of children and women, as shields for their escape. Yet, Thornton’s men do not hesitate for a second firing into the crowd and killing some of the marchers and in the chaos 5 of the outlaws escape with the bags of gold, but Buck and Abe don’t make it out of town alive.

At their rendezvous point, the old geezer left behind to watch the fresh horses, Sykes (Edmond O’Brien), greets them with maddening cackles of jubilation. When the gang opens up their railroad bags, they are surprised to find them filled with washers. Discouraged but still able to laugh at their misfortune Pike’s gang goes to Mexico and passes through Angel’s ravaged home village, with the bounty hunters in hot pursuit.

The film is set in 1913 and Europe is nearing the outbreak of WWI, while in Mexico there is a revolution taking place and a self-appointed dictator with the help of Germany is looting the country and arming himself while trying to put down the revolution. Angel turns out to be opposed to the local dictator, Mapache (Emilio Fernandez), who has sacked his village and, on a personal basis, he is revolted to learn that his girlfriend has voluntarily run off with the generalissimo.

Pike sees in this generalissimo an opportunity to get gold as he is told when he meets him of a U.S. Army shipment of weapons coming through by rail, which he doesn’t want to rob himself because he doesn’t want to alienate the U.S.. The gringos agree to do it for the money promised by the dictator, as they have nothing to lose because they are wanted anyway back in the States. Only Angel is upset by this, saying he sides with the people in the mountains fighting the dictator. So a deal is secretly worked out whereas they will allow Angel to take one crate of rifles to the freedom fighters and they will tell the dictator they lost one shipment of rifles.

These outlaws are seen as the last of a dying breed. Their bonds are formed through loyalty and brotherhood: by giving their word, whoring and getting drunk together, these desperadoes have formed a camaraderie that even humanizes their violent ways to a certain extent. But there are changes in the air through modernization: the generalissimo’s automobile, the telegraph wires and the railroad now linking the country. They realize America and the West as they knew it — is history, and that there is no place for them in the new modern America.

The gang side with the freedom fighters when they had a chance to keep the money and escape the bounty hunters. The gang also rescues Angel who is being tortured in the generalissimo’s headquarters. He is being dragged on the ground while tied by rope to the dictator’s automobile going around in circles, as the children in the village are laughing and lobbing firecrackers at him. Angel is tortured because he was ratted out for stealing the rifles by the mother of his girlfriend. Thereby the memorable closing scene — a picture of pure violence, as the generalissimo’s men and Pike’s remaining men shoot it out leaving no survivors. It is only Thornton and Sykes who live and find salvation by staying in Mexico and joining with the freedom fighters. Sykes when wounded by the bounty hunters and left to die, was rescued from certain death by the freedom fighters who discovered him in the desert. Thornton’s bounty hunters, including two vicious vultures, Coffer (Strother Martin) and T.C. (L.Q. Jones), try to go back home with their bounty to collect their reward, but are not successful. While Thornton makes it clear that he has no respect for the law, for the capitalists, or for the U.S. Army, but he respects Pike because he stood for something real and he realizes that the two of them will always have this in common. His conscience is also clear about not returning, because he only gave his word to get Pike and not to what he would do afterwards. He can now only laugh at what he’s been through as he heads to the hills to be a gunfighter for the cause he might or might not understand, but he has given his word to the revolutionaries and his word is his badge of honor.

They don’t make violent westerns like this one anymore; they tried to imitate it many times, but could never quite capture the same spirit that this classic western had. 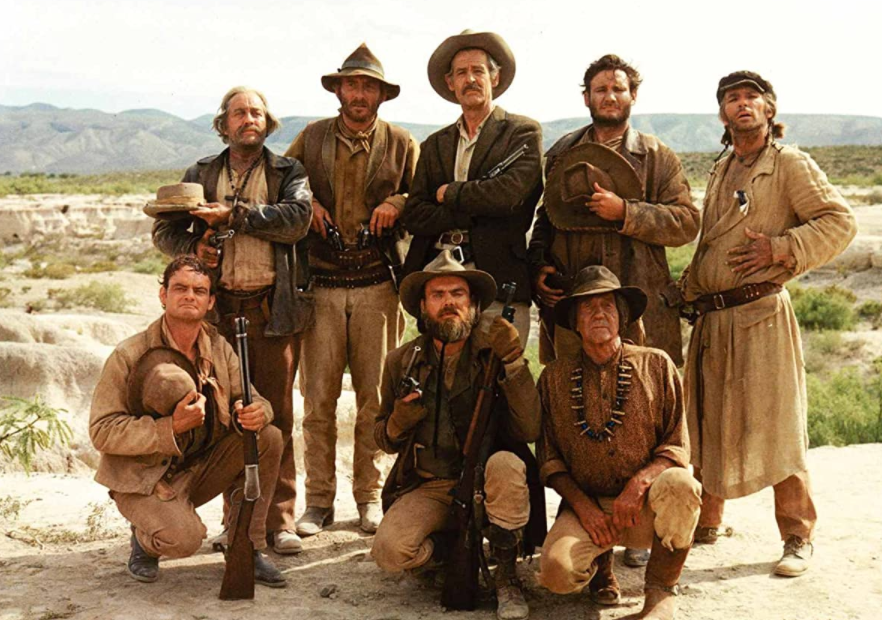 VOICE OF THE WHISTLER

PRISONER OF ZENDA, THE