MARGOT AT THE WEDDING

“A bracing family drama that is appealing only in a disturbing way because its characters make hardly any attempt to be appealing or mask their emotional violence they are willing to dish out.”

A bracing family drama that is appealing only in a disturbing way because its characters make hardly any attempt to be appealing or mask their emotional violence they are willing to dish out. Writer-director Noah Baumbach (“The Squid and the Whale”/”Kicking and Screaming”/”Mr. Jealousy”) helms this intelligently conceived biting psychodrama that keys in on an unhealthy sibling rivalry that has failed to abate with the passing of time. It’s an episodic story about family relations, and tries to keep things in check that has gone awry with its strange humor–a cross between sight gags (the climbing of a favorite rotting tree by one of the sisters to only get stuck in it or the soon-to-be groom sporting a mustache as something thought of as funny) and New York sophisticated wit (throwing emotional digs at others with the earnestness of a knife thrower at a carnival).

Nicole Kidman as Margot, an acerbic self-centered neurotic married Manhattan writer who travels with her bright effete teen son Claude (Zane Pais) to the wedding in the Hamptons of her estranged pretty and intelligent teacher sister Pauline (Jennifer Jason Leigh, real-life wife of Baumbach), who is still searching for her own identity. According to sis Pauline’s marrying beneath her status to the overweight artistic layabout slob Malcolm (Jack Black), who tries his hand in ventures that bring in no coin such as music, painting and letters to the editor. Margot exclaims: “He’s like guys we rejected when we were 16.”

Pauline lives in their parents’ house with her adolescent daughter Ingrid (Flora Cross) and the low-esteemed cheerful Malcolm. The sisters haven’t spoken in ages, and there was bitter feelings left over from Margot’s tell all short story in the New Yorker that spoke of her dysfunctional family in less than glowing terms. Margot’s writer husband Jim (John Turturro) is not invited by Margot to attend, but shows up at one point and his brief presence only highlights how much their marriage is on the rocks. There’s also a local bookstore Q & A hosted by Margot’s former lover, the wealthy and superficial showy historical novelist Dick Koosman (Ciaran Hinds), whom Margot is planning on sleeping with, that is, before he humiliates her with embarrassing family questions about her short story.

There seems to be a strong Gallic influence in the storytelling, reminding me of an Eric Rohmer or Jean Eustache talky character film. This one explodes at the end with chaos, revealed nasty secrets and emotional anarchy, and left me relieved I’m out of there in the nick of time–there’s only so long one can stay with such bad vibed folks before losing it. But while there and getting an earful I was impressed with the skills of Baumbach as a writer and the great performances by the ensemble cast, who were all pitch perfect in their nuanced roles and kept things lively by exposing their bruised souls while trying to retain their dignity and somehow make a connection with the other. Leigh, Kidman and Black are as good as they have ever been, and all bring special qualities to their brittle characters that make them very watchable. 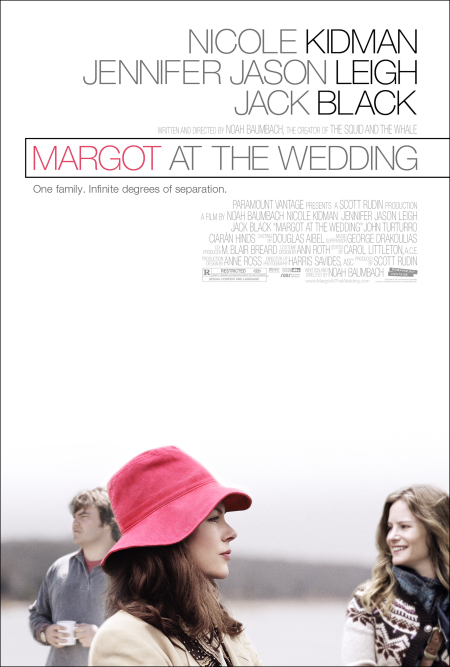