“An energetic but unsatisfyingbehind the scenes account of actors dress rehearsing or in street clothes rehearsing to do the Shakespeare play Richard III.”

Al Pacino (“Chinese Coffee”)stars in, directs and co-produces this educational docu/drama. It’s an energetic but unsatisfying behind the scenes account of actors dress rehearsing or in street clothes rehearsing to do the Shakespeare play Richard III. It’s much ado about nothing, or to put it another way it’s all about Pacino, sporting a baseball hat backwards, showing off that he could perform Shakespeare as written by the Bard or can do it with a heavy NYC accent. The aim here is to show that a big Hollywood star like the diminutive Pacino is really a regular guy who can make “Richard III” accessible to the “average” movie-goer because he knows them so well. Too bad Pacino is such an unaccomplished Shakespearean actor, as it leaves us in the hands of a tour guide who could have used more training himself to do Shakespeare.

The gist of the film has Pacino, co-writer Frederic Kimball and producer Michael Hadge argue over the complexities of the Bard’s play, interviews with noted Shakespearean actors such as John Gielgud, Derek Jacobiand Kenneth Branagh about what the Bard means to them, interviews with some noted Shakespearean scholars to give us their views on the Bard, inter-cut to unimaginative Jay Leno interviews with the common-man on the streets of New York on how they connect or don’t connect with the Bard, and the showing of snippets of the play performed in various locations by actors such as Kevin Spacey, Winona Ryder, and Alec Baldwin.

We get some professional workshop insights into the deformed and venal conniving King‘s rise to power and fall, and a lecture on why the Bard is still relevant. Those who dig the Bard seem to be patting themselves on the back for voicing approval of Shakespeare as a culture icon, while many share with us the passion they have for the great writer and how difficult it may be to translate his plays to the movies. Its ulterior aim is to show that you can be American and still do Shakespeare as well as the Brits.

The docu/drama intends to be both entertaining and informative, but drags its feet in both areas before it reaches the finish line (with a poorly acted scene of Richard dying) and ends up offering too many well-worn reflections on the Bard to be really much more than a Shakespeare for Dummies pic or a pic for those who just get goose-bumps over anything Shakespeare. 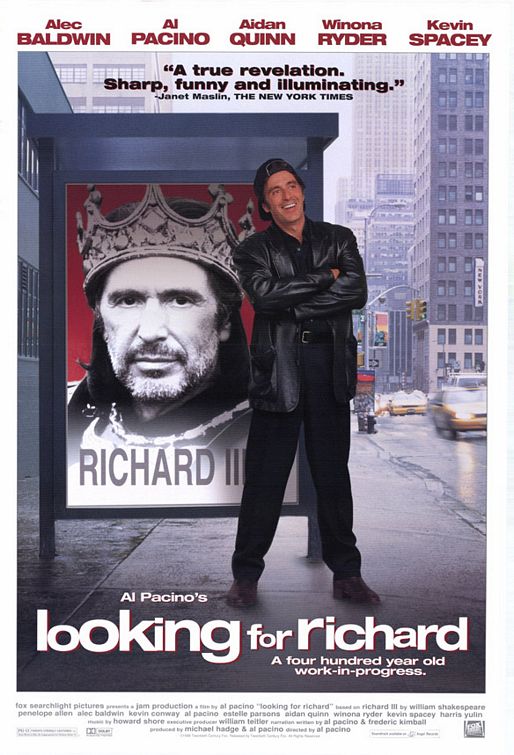