“A dreamlike tale told by an idiosyncratic storyteller who is hyper-imaginative.”

The usually inaccessible arthouse Winnipeg, Canada, filmmaker Guy Maddin (“Tales from the Gimli Hospital”/ “Dracula: Pages From a Virgin’s Diary”/”The Saddest Music in the World”) presents, perhaps, his most personal inaccessible arthouse film yet (in the DVD notes the filmmaker calls this film his autobiography; he casts some family members (his real mom plays a blind grandma) and has the hero’s mother run a beauty salon just like his real mom). It covers the auteur’s usual themes of guilt, incest, revenge, abortion, voyeurism, sexual unrest, hysterical melodrama, and absurd tragi-comedy styled from the early days of film. He builds the story around his love for ice hockey. It’s filmed in 10-chapters and meant to be viewed as a silent black-and-white peepshow with the dialogue written in the interface and each chapter ending like a cliffhanger. The good looking film is shot on grainy Super-8.

The story, set in the 1930s, involves a star hockey player with the Winnipeg Maroons, Guy Maddin (Darcy Fehr), who loses his wits after two severe head-knocks on the ice. Supposedly still in a daze, he’s lured away from his pregnant main squeeze Veronica (Amy Stewart) while she’s getting an abortion that’s witnessed by the Manitoba siren Meta (Melissa Dionisio). She’s the daughter of the hairdresser Liliom (Tara Birtwhistle), who owns a combined hair salon/bordello/backroom abortion clinic. The botched abortion takes place in Liliom’s clinic after Guy is the hero of his team’s victory. Meta will not let Guy ball her until her father Chas’s death is avenged. Meta witnessed her mother’s lover, Guy’s teammate Shaky, strangle Chas while getting a shampoo. After cutting off her father’s hands and keeping it in a jar, Meta has the Maroon’s sinister team doctor, Dr. Fusi, transplant his hands onto Guy. Fusi, not going along with the weird script, tosses Chas’s hands and instead of cutting off Guy’s hands paints them blue. This fools everyone except for the discernible viewer. Guy, thinking he has Chas’s hands, goes to get revenge on the one who did his girl wrong. Another plot twist, has Guy working as a hairdresser in the salon while he tries to shake off his hockey injuries for a future return to action. At the salon, the unstable Guy falls for another new girl — the ghost of his dead girlfriend Veronica. But, as it turns out, Veronica’s ghost has eyes only for Guy’s lusty elderly father–the radio announcer for the Maroons.

The story can’t be believed as anything but bizarre and comical. It feels delusional. A dreamlike tale told by an idiosyncratic storyteller who is hyper-imaginative, whose strange quest is rooted in the early history of film and to boggle the mind of the modern viewer with a fresh way of looking at film. Maddin’s aim seems to be to take film away from its commercialism and make it a more interesting artistic medium for the chosen few who have acquired a taste for the avant-garde. The few obsessed, intrepid and talented indie filmmakers like Maddin should be applauded and encouraged in their visionary endeavors. His film looks as if it was not only a great silent by Fritz Lang but an unusual modern film that can’t be properly categorized (which is, indeed, a compliment). 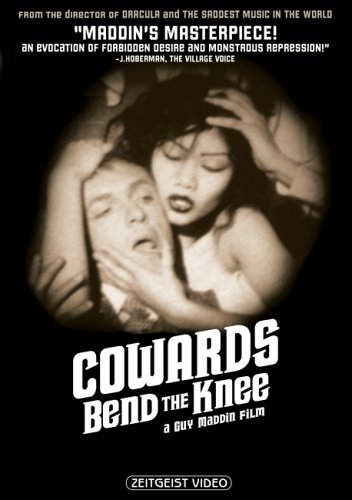