A muddled political thriller that goes off topic to sway in favor of becoming a Hollywood thriller through diverting plot twists rather than straightening out what it meant by its portrait of two Palestinian suicide bombers and what propelled them to take on such a psychopathic desperate mission. Netherlands-based but born in Nazareth (the film was shot here) writer-director Hany Abu-Assad (“Rana’s Wedding”/”Ford Transit”) and Dutch co-writer and producer Bero Beyer weave a story around the demoralizing effects of the occupation (such as when crossing the checkpoints) and the daily humiliation felt by the occupied Arabs (facing hopeless poverty, poor job opportunities, despicable living conditions, and living under their enemy’s rule). It also depicts how these bad conditions pave the way for oily recruiters (they didn’t seem overtly religious or ideological, so I had no idea what fanatical group they were supposed to represent) to recruit from those who are convinced the only way to regain their dignity is to be a martyr and thereby be received as a hero by those left behind and welcomed in paradise by God. Why someone would strap onto their body explosives and kill others as well as themselves, is examined up to a point. It stops short of sympathizing with these twisted minds, as it only aims to give them a human face and say we know why they’re angry but their methods are not working to change things for the better. It will follow the suicide bombers from just before they found out about their mission until we see the final shot of one of the suicide bombers sitting in a Tel Aviv bus that’s filled with soldiers, children and ordinary Israelis.

It’s a timely film that is disturbing but not necessarily fulfilling, as it never takes a stand and makes clear what is its thinking (thereby probably not satisfying either the extremists or moderates, or having much effect in its tepid political message).

Said (Kais Nashef) and his best friend Khaled (Ali Suliman) are both young Palestinians living in Nablus and working for cheap as car mechanics in an Arab-run repair shop. The hot-tempered Khaled loses his cool with a complaining customer and breaks off his bumper, which gets him fired. Suhu (Lubna Azabal), a customer at the repair shop, has just arrived from France. She’s the attractive, cosmopolitan and sophisticated daughter of a legendary “martyr,” who has lived abroad from many years but now has returned. She flirts with Said and he’s attracted to her.

Later that day an extremist recruiter Jamal (Amer Hlehel) tells Said that he’s been selected for a long-planned vital suicide bombing in Tel Aviv in retaliation for the Israeli execution of one of their leaders and that Khaled will be joining him. Jamal stays with Said at his unsuspecting mother’s (Hiam Abbass) house, while another recruiter supposedly stays with Khaled (we do not follow Khaled there). Said sneaks away at 4 a.m. to return Suhu’s car keys and she’s surprisingly awake, and invites him in for a chat. The foreign educated Suhu has a different slant on things than Said, and suggests there must be more peaceful ways of gaining their independence than through violence–speaking from experience as she misses her father. Her role appears contrived, as the romantic part goes on hold while she’s used as the symbolic voice of reason as she acts as a foil to Said by calling for moderation among men who are too emotionally wounded to respond to love or the voice of the people as a cure-all.

The men are taken by their recruiters to a hideout spot where they are videotaping their farewell statements, which comically go wrong because the equipment malfunctions (we later learn all such tapes are sold as videos in the West Bank stores). Afterwards they get cleaned up and shaved, have the bombs strapped to them, and are dressed with suits to make it appear as if they are attending a wedding. They cross a broken fence in the West Bank, but their Israeli contact fails to show and afraid of being spotted Khaled returns but Said disappears in Israel among the settlers. As the mission goes unexpectedly wrong (no cell phones or Plan B–ala W’s Iraqi war strategy), Said’s loyalty somehow gets challenged. Khaled is eventually sent out to try to locate him and get him to return to complete the mission. Though this part of the film remains tense because of all of its contrivances and unlikely improbabilities keep things hopping, but it loses its point of view in favor of becoming a thriller that leads to a forced ending. Nevertheless what it does show is how easy it is to recruit in such a desperate place, where the reasons can range from personal shame to impotence over the political situation to a sense of hopelessness that it’s better checking out of this hellhole in favor of a promised paradise–even if it might not be true.

The film never quite identifies both Palestinians and Israelis as victims (it almost does, but backs off) and never states that the only meaningful way to change such a bad situation is for both sides to put away their violent sides and try to see the other’s point of view so this not so impossible to resolve conflict can be resolved by those who have compassion for each other despite their vast differences and are willing to make the necessary compromises for the greater good of all. 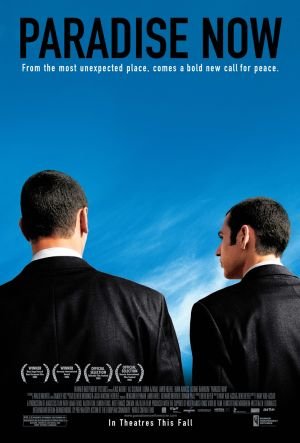