A noir film that is noted for its brilliant character study of four criminals: the psychopathic killer Eli Wallach (Dancer); his older partner and mentor, Robert Keith (Julian); the dipso-maniacal driver of the getaway car, Richard Jaeckel (Sandy McLain); and, the cold-hearted boss of the heroin smuggling ring, the wheelchair-bound cripple known only as The Man (Vaughn Taylor).

Warning: the review has many spoilers throughout.

The b/w film starts off fast-paced and never stops to catch its breath. A porter throws some luggage in the back of a San Francisco cab and the cabbie panics upon seeing a cop and runs him over, but not before the cop fires a shot killing him. The investigating officers, Lieutenant Guthrie (Warner Anderson-he was in the TV series) and Inspector Quine (Emile Meyer), question a Mr. Dressler (Bailey), who is a manager with The San Francisco Opera House, after they find in his luggage a figurine with a quarter of a kilo of heroin in it. They ascertain after initially being suspicious of him that he is an innocent victim of a drug smuggling operation that uses tourists unwittingly, by placing the drugs in their luggage and then stealing back the contents after they clear customs. The same porter who threw the luggage in the cab is soon found by the police in the water, apparently dying from a hot shot (an overdose of heroin). This comes about after there is an actual lineup in the film, as all the ship’s porters are brought in so that Dressler could identify the one who threw his luggage in the cab. But since the rather snooty Dressler was not observant of these lower-class types, he was unable to pick the porter out of the lineup.

Into the picture enters Dancer and Julian, on a flight from Miami to San Francisco, casually discussing the use of the subjunctive tense. The older mentor tells him to use the term “If I were you, instead of I was you, it sounds better,” and he then rhetorically comments, “How many characters who hang out on street corners can say If I were you!” Julian is trying his best to upgrade the volatile Dancer into becoming a first-class hood, rather than just being a run-of-the mill psychopath. One of the other peculiarities that Julian has is that he likes to know from Dancer the last words his victims say, just before he shoots them. These two psychopaths are real beauties, and give the film the kind of quirkiness that keeps its brutal scenes counterbalanced with a nice edge of verbal nastiness.

Landing in S.F., Dancer and Julian’s wheel-man, Sandy McLain, meets them with his souped-up rental car (rented with a stolen credit card) by their motel, and the dialogue among the three is a real treat for fans of this genre. Sandy asks them, “How does it feel to earn $5,000 for one day of work?”And, Julian responds, “Dancer derives no particular pleasure from the money.” As Sandy keeps yapping away and drinking whiskey from a bottle Julian empties the bottle and tells him: “We prefer as little conversation from outsiders as possible, Dancer works better that way.”

The hitmen are on a mission to retrieve three separate shipments of heroin smuggled into S.F. from Hong Kong by three different voyagers on the boat and get it to The Man by four-thirty P.M.. The boss is not known by the hired thugs, who are curious about him and question the driver about him without getting any results.

The first shipment is willingly brought in by a merchant seaman (Warner), who is not supposed to know what he is bringing in but finds out and tries to extort more money from Dancer than his agreed upon payment. Before Dancer kills him in the steamroom of the Merchants Seaman’s Hotel, he corrects the seaman’s English when he says “I don’t like it when I can’t see who I am talking to.” Dancer emphatically responds, “It is WHOM.” Warner’s last words, duly noted for Julian’s benefit are “Why be greedy?” This comes after asking for only a thousand dollars for his silence. The second shipment came by way of an unsuspecting couple, as the shipment was placed in their silverware. When Dancer comes to their home and they are unavailable he tells the servant (Tang) that there was a mix-up of luggage on the boat and requests to switch luggage. The servant becomes suspicious of him and refuses to give him the silverware case which turns out to be a mistake, as the maniacal Dancer kills him without blinking an eye as he is running up the stairs to tell his employer. His last words are: “Mr. Sanders!” The final shipment was brought in by a mother and a daughter, as the heroin is concealed inside the girl’s Japanese doll. They meet the two in an aquarium and Dancer tries his charm out on the mother who is disappointed that the girl’s father did not meet them when the boat arrived; Dancer tells her no one likes to travel alone and they go back to the hotel together. But things go wrong when they find that the heroin packet is not inside the doll. The girl found the powder and thought it was makeup, so she powdered the doll’s face. Instead of killing them Julian talks Dancer into taking them back to The Man to explain what happened to the drugs, this way they won’t have to worry if The Man thinks they ran off with his heroin and has to put out a hit on them.

The hitmen arrive at an arcade called Sutro’s Museum, but they don’t realize that an alert mounted horse policeman spotted their license plate and the police had trailed them here. Dancer goes to give The Man the heroin shipments but when he talks to him trying to explain what happened, The Man tells him that he’s dead ’cause nobody sees my face and lives. Well, Dancer takes one more humiliation from him, a slap in the kisser, then he pushes the wheel chaired boss to his death down onto an ice skating rink. The Man is a cruel reminder to Dancer of his father, which is supposed to explain why Dancer is so driven with hate. Earlier in the film, Julian tells how Dancer is addicted with hate because his father abandoned him.

The climax comes by way of a high speed chase, that ends when the wheel-man goes down the wrong highway and gets stuck where the highway is under construction. When turning around to get back on the freeway Dancer kills the wheel-man for his mistake. When Julian starts blaming him for getting them in this mess and goes to surrender to the police, Dancer plugs his pal in the back but not before he says “How about some last words for the book?” He then takes the girl hostage but she frees herself from him and the police shoot Dancer, and the girl and her mother are found to be safe; the film ends just as tidied up as it does as if it were on the popular TV series.

This film is noteworthy for its sadistic story, but what makes it rise above the ordinary B movie is the strangely provocative dialogue and the utter depravity of all the criminals who are shown in all their ugliness and unredeemed features. It also makes good use of locales such as the aquarium and ice skating rink and the half-finished highway. It also adds a feeling of desperation by using props such as the Japanese doll, which is ravished by the psychopaths. They revert back to their violent impulses when they can’t get what they want by acting nice. But what turns out to be their downfall, is precipitated by the one-time they are unprofessional and want to see who their boss is. The outcome shows that they can’t rise to another social level despite all their efforts to polish Dancer’s image. 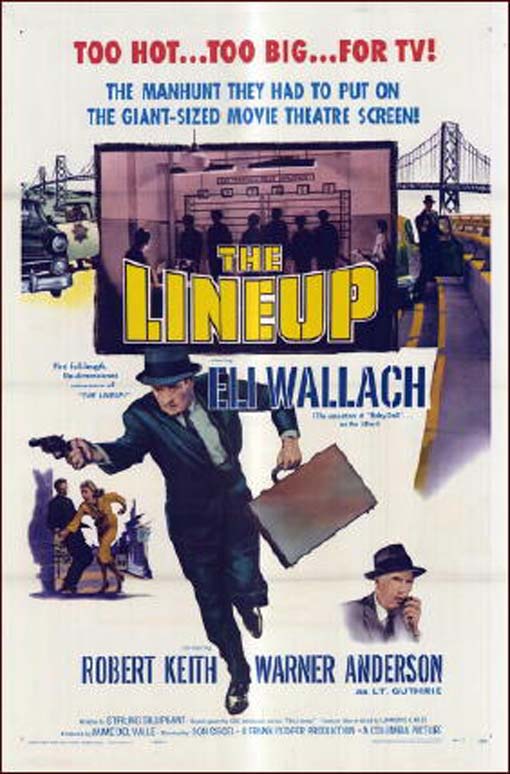