It’s based on the 1976 novel Space Vampires by British occult writer Colin Wilson and is scripted by Don Jakoby and Dan O’Bannon.

Its disjointed story and its exploitative use of nudity and gore, left me feeling as if my soul was sucked out of me. The pic flopped with most critics (a few found it a daring film with merit) and was a big-time flop at the box-office (made for $25 million but only grossing 11 million), but in recent times has gained some supporters who claim at least it wasn’t as bland as most vampire flicks of the time.

The modernized space shuttle Churchill, operated by the U.S. Air Force Colonel Carlsen (Steve Railsback), on a joint space mission with American and British astronauts, locates inside the tail of Halley’s Comet a two-mile long alien spaceship. It’s searched and there’s found inside hundreds of corpses of hollowed out devil bats and in a crystalline chamber the preserved humanoid dead bodies of three nudes in coffins — a beautiful woman known as Space Girl (Mathilda May, French actress) and two males (one is Mick Jagger’s brother, Chris). The Churchill brings the corpses onto the shuttle. On the voyage home, the spaceship is destroyed in an accident, but the pilot Carlsen is the lone survivor who escapes in a pod and the three corpses remain preserved in the destroyed spaceship that reached earth. The alien corpses come to life as vampires in the government research center in London, when taken there for further study. In the secure compound, the nude Space Girl escapes as a vampire and goes on a rampage in the nearby park after sucking the lifeforce out of the sexually overcome scientists and the bedazzled security people. She reaches the streets of London as a shape-shifter taking the bodies of her vics and unleashing a horde of attacking vampires. Carlsen pursues her, hoping to save the world. The Colonel of the Special Air Services, Caine (Peter Firth), a take charge guy, organizes the search for her capture, while the research center’s expert on death, a biochemist named Dr. Fallada (Frank Finlay), tries to say something relevant about life after death that isn’t risible by mimicking what the Hammer star Peter Cushing might say if he were in that role. Other notable characters include the research center’s Dr. Bukovsky (Michael Gothard), who is treated as an important scientist, who seems to do nothing that matters but die. Another unfortunate character, with not much to do is the Home Secretary, Sir Percy Heseltine (Aubrey Morris), who has his neck broken.

My favorite character is Dr. Armstrong (Patrick Stewart), the Director of the Thurlstone Hospital for the Criminally Insane. He becomes possessed by Space Girl, who takes over his bod and speaks for him, and wouldn’t you know it while doped up with a sleep serum clamors “I am the feminine in your mind, Carlsen” and gives the lovesick savior (in a wooden performance by the miscast Railsback), a love kiss before hemorrhaging to death.

The special effects by John Dykstra were impressive. Its humor or satire or coherence in storytelling (trying to make a heady vampire film that says its successful career men fail to satisfy a sexy alien woman’s sexual desires) never materializes as funny (except for unintentional laughs) or meaningful, and its puzzling ending was not lucid. It came across instead as an undeveloped film that never worked as intended. It was a film that could ruin careers, just ask Hooper. He never recovered from its poor showing and his promising movie career stalled. 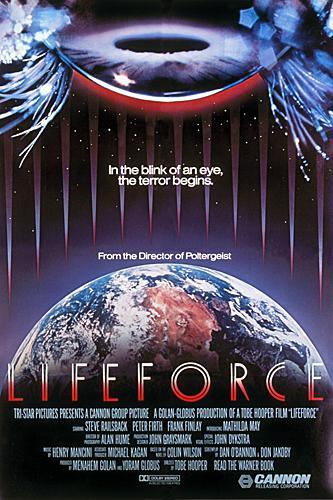