This needlessly complicated glossy thriller has some marginal thrills but is so all over the map that it makes little sense. It’s adapted by William Goldman from his own novel, and is helmed by overrated Brit director John Schlesinger (“Darling”/”Billy Liar”/”Midnight Cowboy”).

Thomas ‘Babe’ Levy (Dustin Hoffman) is a Columbia University doctoral student and an avid jogger in Central Park, who is haunted by the memory of his dishonored father’s suicide 20 years ago brought about by the McCarthy witchhunts. When Thomas’s older globe-trotter wealthy businessman brother Henry ‘Doc’ Levy (Roy Scheider), just arriving from Paris, mysteriously shows up in his dumpy upper-West Side apartment near death after a savage attack and soon dies there, he finds himself involved in his brother’s treacherous business with some tough hombres after him.

From oily CIA agent Peter Janeway (William Devane), we learn that Doc is a contractor working for the agency as a go-between for the fugitive Nazi war criminal Christian Szell (Olivier), a sadistic Jew hating dentist in the concentration camp who stole the gold teeth from the Jewish victims, who has made a special deal with the agents to give up for diamonds other Nazis in hiding while he keeps his freedom in South America. When Christian’s elderly Nazi brother, Klaus Szell (Ben Dova), who has in his possession in a NYC bank’s safety deposit box a fortune in diamonds, dies in a freak accident, where he goes up in flames after hitting an oil truck, Christian leaves his safe haven hideout in the Uruguay jungle to come to NYC to get the diamonds.

Christian, who killed Doc in fear he would rob him, has his goons kidnap Thomas and, in the film’s centerpiece scene, keeps asking “Is it safe?” as the dentist tortures Thomas in a deserted warehouse by using his dentist drills as a weapon. Thomas uses his skills as a marathon runner to escape, but then must avoid some double-crossers who are also after him. By the time the film is almost over, the murky plotline is at least layed out; but, that’s not to say it all adds up as logical and that there aren’t a number of loose ends left hanging. I still don’t understand what the Nazi brothers have to do with Thomas’s left wing father and what exactly was Doc’s role in helping the Nazis as a courier for their diamonds. Thrown into the mix is Thomas’s new love interest, Elsa Opel (Marthe Keller), a Columbia University grad student from Switzerland, but really a German who is also a diamond courier in the Szell deal, and who also knows Janeway.

In any case, there are a lot of bodies that fall, the 69-year-old Olivier makes for a chilling ex-Nazi sadist, and the young Method acting Hoffman gives an hysterical performance that would have been hysterical if this was a comedy. The film made little sense to me, but somehow it was watchable as a time killer. 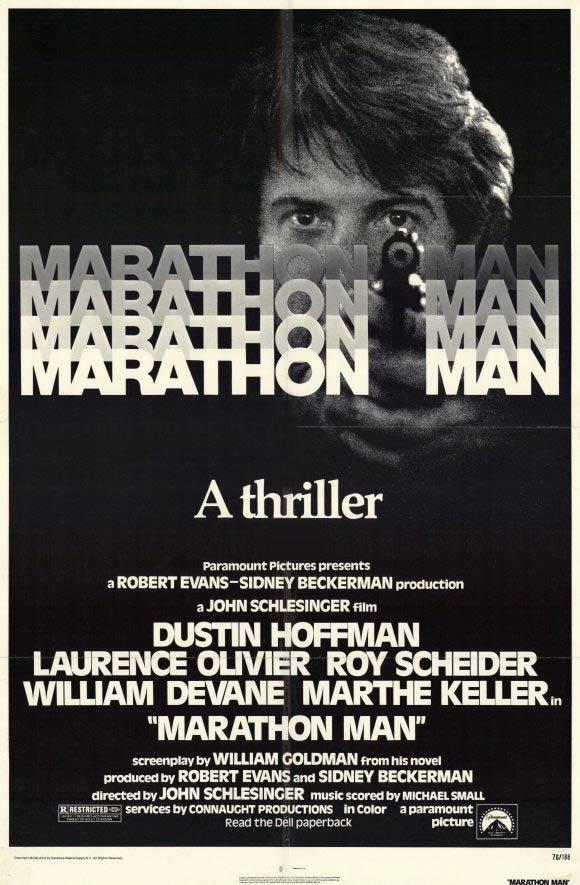