“Sets a gentle and conciliatory mood that takes a lot of the starch out of the love-hate relationship between France and America.“

Director-cowriter James Ivory and producer Ismail Merchant and regular screenwriter Ruth Prawer Jhabvala collaborate to put Diane Johnson’s smart 1997 best-selling novel to film, as they successfully capture its essence and witty charm. It’s a modern-day comedy of manners in which American stepsisters, Isabel Walker (Kate Hudson) and her older sister Roxeanne de Persand (Naomi Watts), are involved in a messy French social mores dilemma. Culture clashes abound in this Americans in Paris film whose sophisticated story has an upper-class look. It examines how much the French differ from their American counterparts, and despite its mainly sitcom comic aims it still sheds some light on the current spat between the two governments and eases some of the misunderstandings among citizens of both countries.

The 19-year-old Isabel has dropped out of film school in Santa Barbara, California, and arrives in Paris to visit poetess sister Roxy, who has a young daughter Gennie and is a few months pregnant. Her French painter husband, Charles-Henri de Persand (Melvil Poupaud), takes her completely by surprise by abandoning her just as Isabel arrives. The handsome scoundrel is taken with a married Russian woman named Magda Tellman and treats Roxy with contempt, as if he were the injured party as she balks at giving him a divorce. Magda’s husband (Modine) is a volatile and unstable American entertainment lawyer, who unsuccessfully tries to team up with Roxy to fight the divorce as he stalks her. The heavy-hearted husband sticks out from every other character, and is so violently driven that his actions alienate even his fellow-Americans. I guess that’s the point of his characterization, as the film dissects both the ugly overly emotional Americans and the ugly French snobs. But it favors neither side, as the script is to clever for that. Instead it cajoles the viewer to accept both cultures for their faults and strengths, as it acts as a cultural mediator. The damage incurred over the disagreement between the Chirac and Bush administrations over the Iraq War, needs such a lighter satirical look to lessen all the damage inflicted. I believe this film is timely, and its value goes further than its mundane aims to entertain. I’m usually bored with Ivory-Merchant vehicles, considering them stuck in Masterpiece Theater-like safe projects where art is tamed and middle-class values are promoted at the expense of all other values. But though this film is certainly not subversive, I found it necessary as a vehicle that brings great actors from both countries together and allows us to see that not all Americans are warmongers and not all Frenchmen hate the Americans out of jealousy and spite.

The plot involves the complications that take place during the divorce battle before the papers are even filed, as Charles-Henri is more interested in getting half the property than preserving his family or reconciling with Roxy. A bitter dispute arises over a 17th-century French painting of Saint Ursula, saint of the virgins, that might have been painted by French artist Georges de La Tour, and therefore worth some real money. It’s an heirloom that Roxy’s father Chester Walker gave her as a present, and hangs in the couple’s Paris apartment. According to the lawyers, French law allows for the couple’s mutual property to be equally divided. Therefore when the painting is appraised by first a representative for the Getty Museum (Bebe Neuwirth) and then by an agent of Christie’s, Janely (Stephen Fry), both families are interested. Janely had the line with the most laughs, as the clueless Walker family jumps for joy in disbelief that the painting is worth over a million pounds and want confirmation that is a lot of money. But all Janely can say is “Yes, to some people I suppose it is.”

The other cultural conflict arises when the naive and resolute Isabel is attracted to Charles-Henri’s brother Edgar — a 70-year-old TV personality and former diplomat who is passionately calling for French intervention in Bosnia. Isabel also fools around with a young French idealist, Yves (Romain Duris), whom she is not serious about except as a temporary bed partner while he’s miffed that she cares more for the older man than him.

Isabel becomes the married man’s mistress and receives as a gift an expensive Kelly bag (a type of purse worn by Grace Kelly). To famous American expatriate author Olivia Pace (Glenn Close), who has hired Isabel to help sort her literary papers she has donated to her alma mata Tulsa University, this gift is a sure sign of an affair with Edgar. Olivia also had an affair with him when she first moved to Paris and was much younger, and she also received a Hermes bag. The running gag is that the smoothie womanizer gives all the women he has an affair with such a present in the beginning and a scarf at the end.

The ritzy country estate of Suzanne de Persand (Leslie Caron), Charles-Henri’s mother, serves to show how classy the French upper-class live in contrast to how loud and boorish are their American equals. This is supposedly apparent when the California family visit their daughters in Paris and dine at the estate. Suzanne thinks poorly of the Americans and can’t hide her disgust with them for not being discrete in their affairs of the heart as they always yield to their emotions. In contrast Mrs Walker (Channing), Roxy’s stepmother, is an easy going practical woman, who has a way of getting to the truth without being nasty or dawdling about.

Not all the scenes work, as the suspenseful climax on the Eiffel Tower seemed out of place. Also the need for a happy ending and tying everything up too neatly, even providing Roxy with a new lover, seemed to be a poor film-making decision. But despite those contrived moments and a film with too many characters for us to become involved with all of them, it still sets a gentle and conciliatory mood that takes a lot of the starch out of the love-hate relationship between France and America. 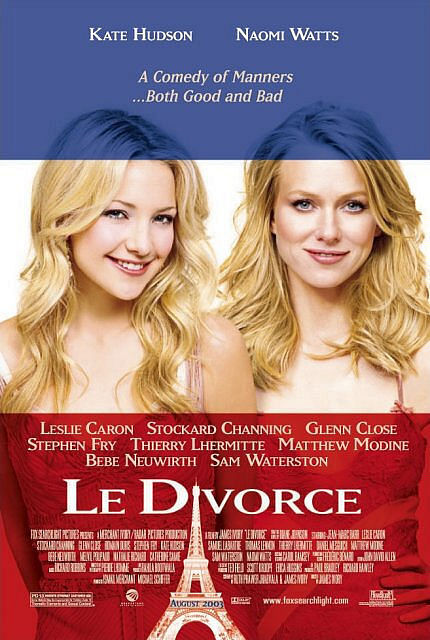