King Vidor’s (“The Crowd”/”The Fountainhead”/”War and Peace”) popular moving antiwar WWI drama set the tone for how to shoot a war film. It was the biggest grossing silent of all time (MGM’s biggest b.o. film until its 1939 GWTW) and also collected critical acclaim for its artistic merits. It’s filled with harrowing war scenes and much comic relief, a winning combo in the eyes of the public. But time has not been kind to its reliance on buddy humor, a centerpiece scene having dough-boy James Apperson (John Gilbert) teaching French peasant girl Melisande (Renée Adorée) how to chew gum and its pull at the heartstrings when our patriotic hero returns from the war minus a leg and a case of disillusionment. Nevertheless there’s a certain snap in this $382,000 budgeted episodic war drama that cuts through its sentimentality and romanticizing of war, giving it enough of an edge for the actors to come out firing straight at their target. Matinee idol John Gilbert is still most remembered for this film even though he shaved off his trademark mustache to look like the all-American boy. It’s based on a short story What Price is Glory? by Laurence Stallings.

It begins at the onset of WWI involvement for America and shows men from all walks of life answer their country’s call to war for patriotic reasons. It turns to NYC where the recruits are laborer Slim (Karl Dane) and bartender Bull (Tom O’Brien) and Jim Apperson, the idle rich boy living in a mansion with servants and the son of mill owner (Hobart Bosworth). The film’s first half seems to go on forever showing Jim in France engaging in endless horseplay with his lower-class army buddies Slim and Bull (emphasizing how democratic is the war front, something I imagine you can’t show so easily today!). It all builds to the big battle scene that earned the pic its rep as the most realistic war film at the time (it follows D.W. Griffith’s 1918 Hearts of the World). Five years later All Quiet on the Western Front also used art to box-office advantage and promoted its antiwar sentiments by showing the horrors of war.

The noted scenes include the Belleau forest sequence in which the marching soldiers are picked off one by one by snipers hidden in the trees, the reunion sequence between amputee Jim and his loving mother (Claire McDowell) as they embrace and she flashes back to his childhood when he took his first steps, and the finale of a hobbling Jim on crutches returning to France and his dream girl as promised. 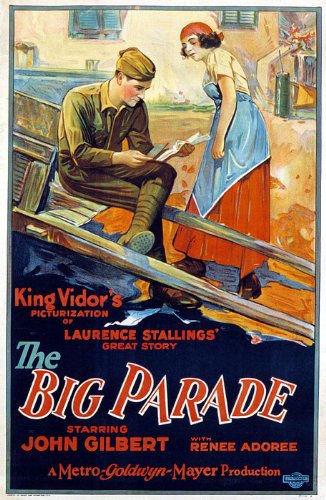