(
“This is another in a long line of indie ‘buddy films’ about desperadoes going on the road.”

This is another in a long line of indie ‘buddy films’ about desperadoes going on the road. It features characters who all have something about them that is dysfunctional: they are illiterate, have a depraved mental condition, suffer from greed, or just like to kill people. It’s meant to be a hip version of the noir classic “The Treasure of Sierra Madre” lacking only the breath and depth in its story to touch base with the classic, but letting its own dimwitted energy do its talking.

The road it takes is across the southwestern desert and across the barren culture of the white trash trailer park crowd. Lewis (Xuereb) is a psychopathic killer serving time for murder, his prisonmate Clark (Gunther) is serving a 5-year term for computer fraud. These opposites escape together, armed with a map of a gold mine in an undisclosed destination in Mexico which a prisoner friend of Lewis’ gave him before he died. Since Lewis can’t read, he decided to take Clark along with him as a partner. Clark figures he likes gold more than he detests Lewis, so an untenable partnership is agreed to.

The delicious George (McGowan) is seen climbing over a zoo fence, stealing a rare venomous snake. While Fred (LaFleur), a man who loves to carry a bowling ball around with him as if to let others know how cultured he is, finds out from George’s sleazy boyfriend that the advance he gave the couple for $10,000, for whatever illegal deal they had going down, was lost in Las Vegas. Fred seriously beats the boyfriend, but George gets away and in her flight she steals a truck from a cowboy whose attention is diverted because he has the hots for her. She then dumps the truck and steals a car with a trailer hitched to it that has the dead body of the car owner’s mother, who died on a vacation to Hollywood and is being taken back to Dallas for burial. While parked outside a cafe, George overhears an argument Lewis and Clark are having about Clark being upset that Lewis just killed a postman, whom he thought by the appearance of the uniform was a cop. She also hears gold mine mentioned, and when Clark takes Lewis’ gun and splits from him she smilingly pulls him into her car and they are off together. She’s a mute and communicates by writing and even though she is obviously untrustworthy and only after the money, Clark falls heavily in love with either her or her big boobs.

Lewis soon meets up with Clark again after he romances a sex-starved stuck-in-the- boondocks trailer park single mom (Paula), whose son doesn’t take his eyes off the TV while the couple do it in the same room. Lewis when he leaves the single mom is captured by the cop (Bartel) he will soon kill. Lewis then goes after Clark and attempts to kill him at their reunion, but is talked out of it for business reasons. George becomes the femme fatale and becomes a ten percent partner; she is invaluable because she can read the Spanish in the map.

The funniest scene is when a van carrying some obnoxious New York tourists meet Lewis at one of the Western tourist sites and slobber all over him and take his picture; they are happy to have met a real cowboy, and Lewis after playing the silent heroic cowboy for their gratification promptly executes all of them.

There is nothing that we haven’t seen before in such road films, from a vintage car convertible to a character with a gun fetish to white trash humor, and finally to mucho random violence.

The characters all had personality. And, even if it is an easy film to forget and requires as little thinking as possible, it was enjoyable. 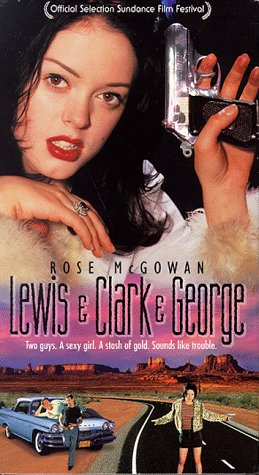