“A deliciously silly monster film for only the lovers of dreadful films.“

A deliciously silly monster film for only the lovers of dreadful films, not to be taken seriously, from the people over at AIP. Konga was produced by the team of Samuel Z. Arkoff, Herman Cohen (who shared in the writing credits with Aben Kandel), Nat Cohen, Stuart Levy, and Jim O’ Connelly. The film was directed in a workmanlike but witless manner by John Lemont. This film continued the trend of teen horror films from AIP (at least there were some teens seen in the streets of London), such as the one produced by Herman Cohen “Horrors of the Black Museum.”

Demented botany prof Dr. Charles Decker (Gough) returns to his home in London after a year’s stay in Africa, where everyone thought he died in a plane crash. While there he discovered a serum extracted from a carnivorous plant that allows animals to grow to an enormous size. He brings back a baby chimp who saved his life by showing him the way to a jungle village following the crash. In London, he grows mutations of those unusual plants with “human characteristics” in his home and injects his chimp friend with his growth serum extracted from the leaves of plant. The chimp grows as huge as a gorilla, and the scientist orders the chimp to kill the lover (Conrad) of the busty blonde student in his class (Claire Gordon) he covets. When the botanist’s ugly duckling assistant Margaret (Margo Johns) discovers her prof boss boffing the blonde in the greenhouse jealously she gets revenge by giving Konga, now a giant chimp, an extra large serving of the serum and turns him into a King Kong-sized monster. Margaret lays out her plans of marriage to the prof, explaining why they would make such a wonderful couple. But the prof, sporting a spiffy wig, continues to dog poor Margaret, as he’s more interested in busty chicks who are young enough to be his daughter. Meanwhile the monstrous Konga places all of London in danger as he goes berserk and the British Army is called in to take him down with rockets and machine guns. In the background we see Big Ben, not the Empire State Building, with the monstrous Konga holding the prof under tow in one of his huge hands.

Gough hams his performance up in an inept but pleasingly entertaining way. He’s a power-hungry, fame-driven mad scientist who will even murder his dean to achieve his career agenda as well as those who interfere with his own personal desires. The story is ludicrous, as it goes from magical spells learned in the Uganda jungle from witch doctors to presenting an awkward political message. The dialogue is banal and the acting is inadequate. But the special effects for such a low-budget film were dandy. They are used well near the conclusion with Konga on a rampage through the streets of London, which is really him loitering in the streets rather than tearing the town apart. The process used was called SpectaMation (giving it the Special FX treatment).

The film’s funniest line which is repeated throughout has Gough telling the man in the gorilla suit “Put me down! You fool!” The line gets increasingly funnier the more it’s repeated. While the movie becomes increasingly more palatable the more you distance yourself from it. 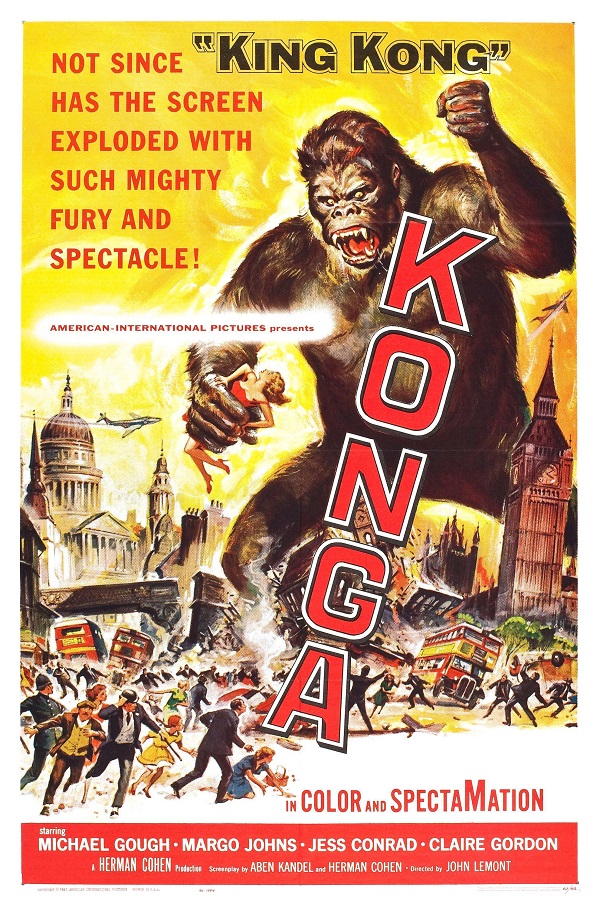