“Madsen’s over-the-top nasty performance as a crazed killer gets your attention, in a film that feels less than filling just five minures after seeing it.“

John Dahl (“Red Rock West”/”The Last Seduction”/”Rounders”) is cowriter (with David W. Warfield) and makes his debut as a director of this pointless and derivative but entertaining modern film noir, that’s set in Nevada. It opens with a bang, as crime couple, Faye (Joanne Whalley-Kilmer) and Vincent (Michael Madsen), kill a Mob bagman in a Nevada robbery and then Faye splits with the briefcase of loot–the treacherous lady wants to go to Las Vegas to play and the psychopath wants to lay low for awhile. In Reno, Faye hires the seedy loser private investigator Jack Andrews (Val Kilmer) for $10,000 to fake her death. Faye fears for her life, as the psycho is after her. Jack takes this shady job because he needs the dough to pay off loan-sharks, who just broke his finger because he missed a payment.

With the help of his assistant Alan (Jonathan Gries), the PI succeeds in faking Faye’s death and coming up with a new identity. But before Faye can pay the man the full amount, she splits for Las Vegas. Jack pursues the thrill seeking femme fatale to Vegas while he’s being pursued by a crazed Vincent, Reno cops, the loan-sharks and the Mob. Things don’t look so good for our boy, but he does catch up with Faye and that brings only more action, double-crosses, chases and another ‘kill me again’ sequence.

Madsen’s over-the-top nasty performance as a crazed killer gets your attention, in a film that feels less than filling just five minures after seeing it. 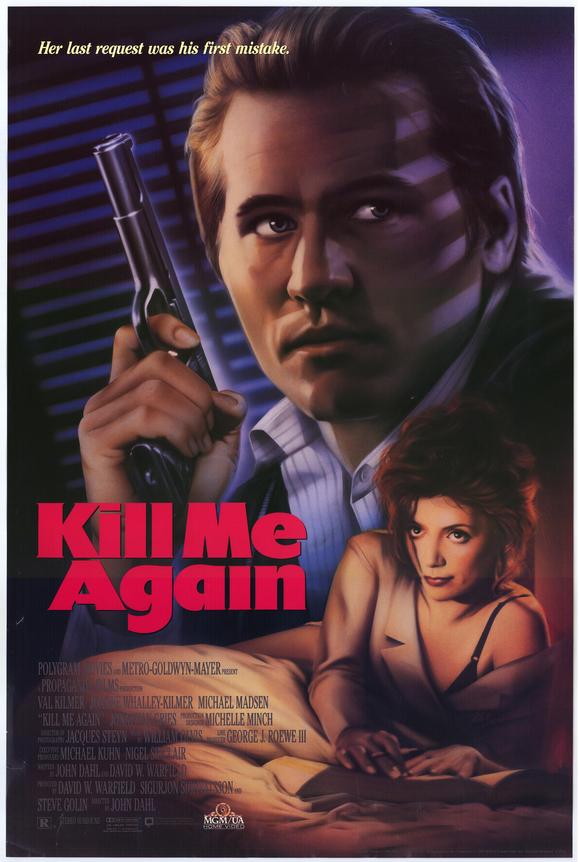