KEEPER OF THE FLAME

An ill-conceived political melodrama modeled after Citizen Kane (thankfully MGM had nothing to do with Orson Welles’ 1941 masterpiece!). George Cukor is the director; it’s adapted by writer Donald Ogden Stewart from the book Keeper of the Flame by I. A. R. Wylie. Despite the teaming of Katharine Hepburn and Spencer Tracy and the excellent performance by Margaret Wycherly, the story is too stiffly told and the simple-minded propaganda conveyed is too absurd to be credible and is delivered in too shrill of an oratory style to be effective. It only proves that Hollywood has trouble handling films with serious themes.

Brash war correspondent Stephen O’Malley (Spencer Tracy) leaves Berlin to cover the accidental death of an American millionaire, the industrialist-patriotic icon, Robert Forrest. O’Malley admired Forrest and wants to write a hero-worshiping but true biography to keep the memory of the Great American alive. He wants to tell what he stands for that endeared him to the public, and why his death has affected so many Americans with sorrow. O’Malley visits Forrest’s New England Xanadu-like mansion and enlists the help of his reclusive widow, Christine Forrest (Katharine Hepburn), as he requests she make him the official biographer. At the urging of her handler, secretary Clive Kerndon (Richard Whorf), she agrees to play ball with O’Malley. Soon the reporter gains the confidence of the reticent widow and by continually prying he finds there’s something not kosher about Robert Forrest. Christine, as the keeper of the flame for her late husband, wants to keep out any memories of him that will soil his reputation. But O’Malley finds many cracks in the Forrest legend, including how his elderly, delusional and invalid mother (Margaret Wycherly) is kept almost as a prisoner on the estate, that the secretary feeds false publicity to the media about the Great Man (plugging him as he would a product), and that Christine is burning revealing papers about her hubby that show he was a fascist who was misleading the American public so that his elite group of contributors can take control of the government by getting around the electoral process. O’Malley, also, finds that Christine failed to warn hubby about driving over the downed bridge during the rainstorm even though she knew about it, and the great reporter (though it’s hard to think of him as such a hot-shot reporter if he fell for the Forrest fairy tale story without sensing something was wrong!) eventually attributes her act of murder as a patriotic act. In a hard to watch scene, Christine in a fit of histrionics tells out how her loving husband changed overnight to an arrogant despot and hated those who worshiped him, as well as Jews and blacks. When Christine is discovered telling all to the famous reporter, Clive kills her. But her story gives O’Malley the inspiration to write the truth about Forrest, as he debunks the myth, in his paper, and he calls the widow the real American hero who gave her life for the American way of life.

If you are a fan of Hepburn and Tracy and love their usual lively repartee, you’re better off sticking with their lighthearted battle-of-the-sexes comedy-romance romps such as Adam’s Rib or Pat and Mike. 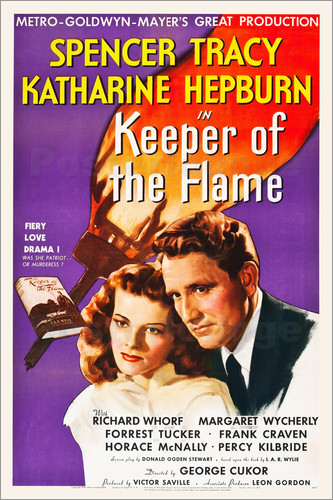