This is a grim morality tale that can’t help putting you in someone else’s shoes, wondering what you would do if you were in the same situation. It is also a “coming-of-age” film, testing a youngster’ mettle to rise above his dire circumstances. It is seen through the troubled eyes of a slender 15-year-old blond, living in Liege, Belgium, named Igor (Renier). He has lost his childlike innocence, already being a petty crook, but is still sexually innocent. He is living with and helping out his single-parent father by doing the dirty work his father is counting on him to do that keeps his unsavory business going. His father, who insists Igor call him by his Christian name Roger (Gourmet), has a construction business where he employs illegal immigrants. He exploits and traffics in them. They come from all over the world, but mostly from Bosnia and Africa. His love for his son is so twisted and wrongly placed, even if it is some form of love that he offers, that it still results in his son being raised by a monster. He keeps him out of school and away from his regular teen friends, allows him to smoke cigarettes, even gets him the same tattoo he has; but the worst thing he does is corrupt him with a false set of values, while having the audacity to tell him that he is doing all this for his sake.

On the day that the government inspectors appear at the construction work site, the illegals are told to hide from the inspectors. One of the illegals, Amidou (Rasmane), from Burkina Faso, falls from a scaffold and needs to be rushed to the hospital. Igor drags him out of the inspector’s sight, but not before Amidou makes him promise that if he dies he will look after his wife and baby. When Roger finishes showing the inspectors around and discovers Amidou is severely injured, he refuses to take him to the hospital afraid that he doesn’t know what to tell the hospital has happened without arousing their suspicions. Instead he gets Igor, who is becoming very squeamish at this point, to help him bury Amidou in concrete, even if he is aware that Amidou is still barely alive.

How cruel can people be to others! … As for Roger there was no question about it, his generosity did not include those outside of his small circle; and, immigrants, especially, black immigrants, were barely seen as even human to him. But something has happened to the kid. He has developed a sense of guilt knowing that he has done something wrong and he also knows that he is trapped, he has to make a decision one way or the other to either be with his father or help the widow. Whichever way he goes, there will be a price to pay for him, he will not be able to satisfy both parties. Going with his father is morally wrong, but perhaps easier for him and a more understandable choice considering that his other choice is with a people he knows nothing about. But the other choice he understands is the right one, and he wrestles with his conscience as he tries to help the widow without hurting his father.

La Promesse has the harsh reality that a documentary might have and considering that the sibling film directors are acclaimed documentary directors for over two decades, it is easy to see that even though this story is fictionalized it, nevertheless, is filmed in the manner of a documentary. The illegals, on the bottom end of the totem pole, are at the mercy of such heartless and bigoted people who swoop down upon them as vultures.

The three main characters are cast perfectly. Igor indicates by his facial expressions that he wants to be a kid again but can’t, as he learns how to face up to the different situations that keep popping up in his life. When we first meet him he is seen as a slick liar and petty thief, swiping a woman’s wallet and then we see him as he gradually changes and develops an empathy for the widow of the immigrant, maybe, even thinking of her as the mother he doesn’t have but certainly needs. He watches with a warm scrutiny as she fiercely tries to protect her child from all the outside evils.

The film could have been done from the father’s point of view instead of the son’s. But, even more interestingly, from Assita’s (the widow) way of seeing things. She has a regality even when she is hopelessly searching for the truth about her husband’s disappearance, not satisfied with the stories Roger and Igor are telling her. When she is left stranded under a trestle and two Belgians piss on her as they are perched above her, we see in her anger and frustration; she is lost in a country of white people she does not understand. But there is an unmistakable presence she has, that clearly shows her noble character, especially when contrasted with all those around her whose minds are so blemished.

Roger is one of the slimiest guys you could ever meet. He is someone who tries to pretend he is good but is so obviously a monster, that it is written all over him. We clearly see what makes him act the way he does. He is not that far removed from the thinking of the ordinary man in the street, except for his utter lack of decorum and social conscience. From his point of view, we could see that he is only looking out for number one. He thinks that if he doesn’t, who else will. An argument you will frequently hear from the man in the street.

To further contrast the differing European and African cultures, we see how the Western medical profession treatment of Assita differs from that of a witch doctor. Igor’s guilt-ridden help, results in Assita being taken to a hospital to find out why her baby is so sick. But they can’t see anything wrong. So she consults an African spiritualist. He determines that she can save the baby by going to see relatives in Italy, that there is nothing that she can accomplish here: the baby is telling her to leave.

When the young Igor can’t live with his father’s cruel dishonesty anymore, one of the more powerful confrontational scenes imaginable takes place between a father and son as the son removes the mental shackles he has worn all his life and places real chains on his father. Then he walks out on him, choosing to help Assita get out of the country, rather than remain with his father. In a strange way, without him or her being conscious of it, she became his surrogate mother.

This powerful tale is unflinchingly honest and moving. It casts a dark shadow over a civilized country’s technological prowess in the world, and questions its humanity and its moral perspectives. It does so in a most tangible way, in a way that should be a disturbing reminder of how complex the problem of immigration is. It’s a film that is piercingly on target as a challenge for all of Europe to keep their “promise” to the immigrants and to see how corrupt their system is and how their safeguards don’t really stop the powerless from being exploited. 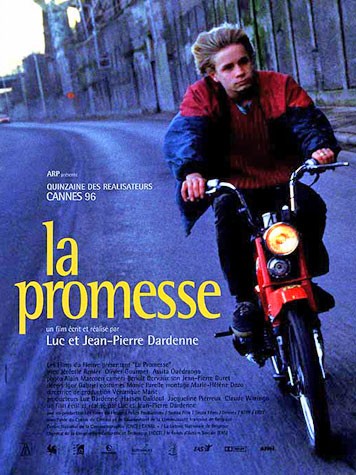