“It’s an easy film to critique for what it doesn’t do.”

“Joy Ride” is calculated to draw fear from the viewer and does not attempt to develop character or enlarge its story, as it goes on a wild cross-country ride into dark terrain. This on the road film is set in the open spaces of the West. Its menacing trucker theme reminded me most of Steven Spielberg’s 1971 film “Duel,” though this one is played more for laughs. It’s also aided by many noirish images and small touches among the supporting characters that give the film a quirky humor, as it scales familiar genre territory from long takes on remote gas stations to dead-end dusty roads to hostile redneck bars. But here the material is freshened with a different take on it.

A University of California student, Lewis Thomas (Paul Walker), calls up his unrequited love, Venna (Leelee Sobieski), someone he’s romantically interested in but has only been Platonic friends with so far. Venna’s from his New Jersey hometown and is now a college freshman in Boulder, Colorado. Lewis offers the attractive girl a ride home for her summer break in a beat-up vintage ’70s Chrysler Newport he just purchased for this occasion. Lewis’s good-for-nothing brother, Fuller (Zahn), a petty criminal with oodles of manic energy and a gift for trouble, is coincidentally being released from a Salt Lake City, Utah, jail. Lewis begrudgingly agrees to also pick him up on the request of his sister and give him a lift home, hoping his brother won’t ruin his secret romantic plans.

While on the road Fuller buys a CB radio for $40 and uses the handle Black Sheep and goads the more timid and straight-arrow Lewis into accepting the handle of Mama’s Boy, and then gets him to disguise his voice as a young lady with the handle of Candy Cane. They play a practical joke on a trucker with the handle Rusty Nail (the voice of Matthew Kimbrough), by getting him to come to the next-door room in the Wyoming motel they are staying at with a bottle of pink champagne to meet her at midnight.

Fuller and Lewis get a laugh over this as they listen in through the thin motel walls when the trucker arrives, but the trucker doesn’t take the joke lightly. In fact, he fatally disfigures the mistaken guy in that motel room, who is found unconscious on the highway the next morning.

The brothers get no comfort from the Wyoming State Troopers investigating the murder and find themselves on the road again and being followed by the trucker in his gigantic rig, whose ominous voice we hear intimidating them over the CB and telling them that they’ll pay for that joke. But we never see him through the hazy windshield of his rig, which makes him even more scary. When the brothers reach Venna, they think they are out of the woods after telling their twisted tormentor there’s no young woman. They therefore fail to tell her what happened–not wanting to scare her off. But returning to their Nebraska motel after a bitter experience in a redneck bar, they receive a threatening call from Rusty Nail and he mysteriously knows everything about them and Venna. How he does–just doesn’t seem to matter, as the film plays out its hand as a sophomoric joke gone dangerously bad. There’s B-film fun here if you don’t mind the many holes in the story and how slight the plot is and how the sadistic trucker can set so many successful traps for them when it doesn’t seem possible, and that we are never let in on the secret of how he does it.

When the boys frantically get Venna to forget about the room she paid for and flee, she jumps into their car to hit the road and asks: “How scared am I supposed to be?” Fuller nervously says, “Much more than usual.”

There’s a sense of the macabre in the Nebraska cornfields, as the psychopathic homicidal trucker starts to do his thing as he closes in on them. But there’s always an element of fun in how absurd this all is, and the mostly teen-ager audience where I saw this film laughed at parts of it and shrieked in fright during the parts that were creepy.

It’s not a terribly interesting film but the director John Dahl (“Red Rock West“/”The Last Seduction“) and his writers Clay Tarver and J. J. Abrams, have made a film that knows its audience and knows how to pull its punches. It’s an easy film to critique for what it doesn’t do, but what it does do very well is take you for a comically dark fantasy ride and the filmmaker keeps this thriller tense throughout. The result is a cleverly done cultish film that’s scary, building to that grotesquely violent finale in the motel. It’s also a bit kinky without any explicit sex scenes. A film that should be admired totally for its entertainment value and filmmaking craftsmanship, and the engaging performance by Zahn. 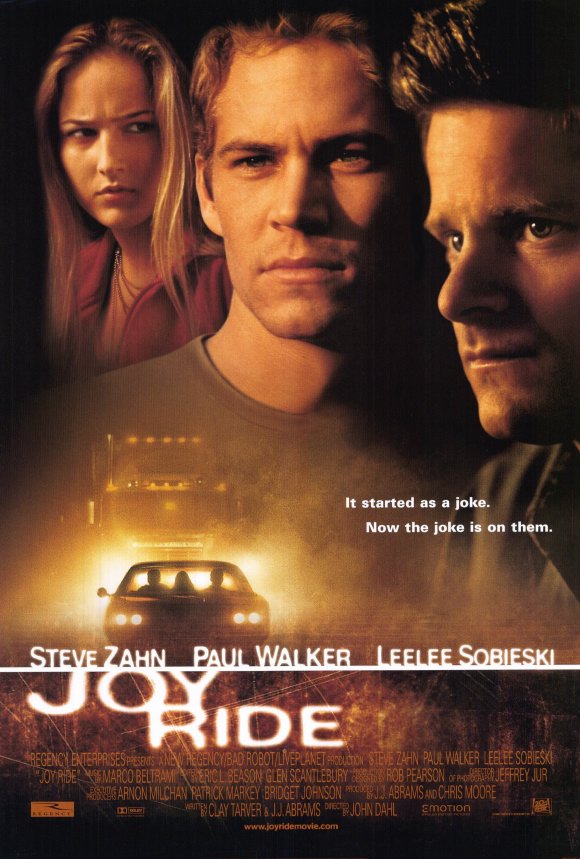