“I especially found the performance of Wei Minzhi to be impactful.”

Zhang Yimou (“Raise the Red Lantern“) has securely grounded a “feel good” film with characters who have greatly touched me, even though the film is bogged down with much communist propaganda and it ends like a typical Hollywood “feel good” movie. In this case with too much good cheer over nothing much accomplished to make it so proud about itself. Nevertheless, this is a brilliantly directed austere film, for the most part, telling about ordinary people in a very poor, rural village in China’s Hebei Province. It held my interest as I observed the classroom dynamics taking place in a broken down one-room schoolhouse and in the contrasting lifestyle shown in the modern Chinese city. These are human interest stories I have not seen before about the new China, presented here in such an informal way. The cast of mostly nonprofessional actors, playing themselves, acquitted their task with a spirited performance, giving power to the story about the problems with rural education for the poor people of that region.

“Not One Less” tells about the duplicitous mayor (Tian Zhenda) of the rural village forced to bring a 13-year-old girl from a farm family, Wei Minzhi, to be a substitute teacher in the Shuixian Primary School (grades one through four) when the regular teacher, an elderly man, Gao Enman, has to leave the area for a month to be with his ailing mother and there is no one else available. In her chat with the regular teacher, we see that she not only doesn’t look like a teacher — but more like the students she is about to teach; and, she also lacks the proper educational skills to function as a teacher. Wei’s only gift is that she knows a few lines of one patriotic song to teach the children, which she sings in an off key voice. To compensate for her inadequacies, Teacher Gao, a dedicated teacher, leaves her 26 lessons she is to write on the board for the month he is gone and 26 precious pieces of chalk, as she will have the students copy her boardwork in their notebooks. He admonishes her not to write the characters too large, because the chalk will run out. The characters should be about the size of a donkey turd. The chalk is in such short-supply that the classroom monitor tells her, the teacher scrapes pieces of it off the floor to use.

Worried about receiving the 50 yuan pay she is promised, Wei is told that she will receive it when the teacher returns if she keeps the 28 pupils she has, not one less. Teacher Gao says he keeps losing these primary grade students who drop-out to work, as he has already lost 10 pupils this year; and, even though he hasn’t been paid in 6 months, he will give her a small bonus of 10 yuan from his own pocket if she keeps the class intact.

Teacher Wei has difficulty getting her class to respect her and call her teacher; she also can’t handle the class troublemaker, an always smiling 11-year-old bully named Zhang Huike. But Wei can be bossy when she has to, and looks upon her main role as keeping the same number of students she was given. Wei’s first major problem arises when a girl who is spotted as a fast runner, is taken away by a city school recruiting her for her athletic ability. This upsets Teacher Wei, who is only interested in keeping her pupil and getting her bonus at the end of the month. The mayor tells her to stop worrying, it’s good for the girl and Teacher Gao will understand that he lost a pupil who wants to better herself and not one who dropped-out.

The teacher’s idea of teaching is to sit outside in front of the classroom door and make sure no one leaves, never mind what mischief or learning goes on inside the classroom. The film is based on the novel by Shi Xiangsheng, who was a teacher in a rural school and should therefore know how shoddy education could be in such places.

When Zhang Huike is missing from school and Teacher Wei goes to his house and speaks to his sick mother and finds that the family has debts because the father is dead, and that Zhang went into the city to get work — she can only think of getting the address of his workplace in the city and going there herself to bring him back. But the mayor will not give her transportation to the city and shrugs his shoulder, saying that’s just the way it is with poor people around here. The resolute girl tries to shake down her class for bus fare to the city, but the class is too poor to come up with the money needed. But when a student says you can get money by carrying bricks, the teacher brings the children to work there and raises just enough money to get her to the city. This leads to the only lesson she ever thought, as she has the children do the math for this real-life problem, of trying to figure out how many bricks it would take to move before she has enough for round-trip bus fare. It’s a communal effort, since her math is not much better than her student’s math.

The selfish teacher finds herself bewildered in the big city of Jiangjiakou and is further disappointed that Zhang never showed up to work, but ran away from the girl he came with, as he left her to go for a pee in the train station and never returned. In this government-sanctioned pic the story was really absorbing up to this point, but it now takes a radical turn for the worst as the teacher decides to find Zhang and bring him back to school no matter what suffering it takes on her part to do it. Supposedly she is no longer doing it out of her own selfishness, but in her inarticulate and resolute way she has learned what it is to be a teacher and care about her pupils and all she’s still missing are the teaching skills.

Wei finds out it is useless to go to the police, they’re just too busy for this kind of job (which struck me as either strange or very revealing about modern China). Wei ends up listening to a stranger in the train station who tells her to go to the TV station. After unsuccessfully trying to see the TV station manager, she ends up sleeping on the street and does this for a day and a half until the manager, who turns out to be sensitive to her plight, gets her onto a popular Oprah-like show, and she tearfully connects again with Zhang. He was seen wandering the streets and begging for food in a restaurant. This looked so unreal, that I thought the last reel got mixed in with one of those typical Hollywood films of this kind. Though what was interesting about this part of the film, was taking a gander at the city and how clean and boring and crowded it looked. Unfortunately, the film never recovered from this artificial twist to the story and concluded with Chinese TV donors sending in money to pay off Zhang’s family debts and the school is given many school supplies to take care of its scarcity and enough money to build a new schoolhouse to replace its broken down one. The message of the film, about the poor conditions of China’s rural schools, was unfortunately delivered in a heavy-handed manner.

The film was so adeptly done and looked and felt so good, and the parts of all the people were played by those playing themselves in such a natural way that I didn’t see its downfall coming until it was too late. By that time I was really getting off on the film and was amazed by the simple daily life rhythms of the schoolchildren and the common villagers, that I was already hooked on liking the film. I especially found the performance of Wei Minzhi to be impactful. I was taken in by the simplicity of who she was and the truth in her character, and the way she was still an innocent child. Because of her cultural background she was obedient and took on the responsibilities of being a substitute teacher, something that she knew she had no ability for but reluctantly had to do, even if she couldn’t explain why. This fictional story showed the power of human love over all the coldness in the world. 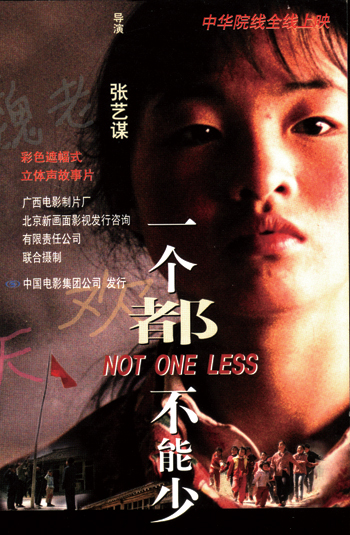