IT’S ALIVE 3: ISLAND OF THE ALIVE

“The weakest one in the series.”

The last of the It’s Alive trilogy was the weakest one in the series. It’s again about those murderous baby mutants and how society deals with them, but adds nothing new as the series was running out of steam. All were directed, written and produced by Larry Cohen (“Original Gangstas”/”The Ambulance”/”The Private Files of J. Edgar Hoover”).

It opens in a court room presided over by Judge Milton Watson (MacDonald Carey). The father of one of the monsters, commercial actor Stephen Jarvis (Michael Moriarty), gets together a committee to stop the government from executing five infants held in captivity. The judge rules that the infants should be kept alive on a secret island uninhabited by humans. Unfortunately for Stephen he can’t get work because no sponsor now wants to be associated with the father of a baby mutant killer, and his wife Ellen (Karen Black) divorces him. Five years later, after Judge Watson dies, the disgruntled Stephen is working at a dead-end job as a salesman of children’s shoes when he’s approached by the research team, headed by Dr. Swenson (Art Lund), who are now allowed to visit the babies and do research on their condition due to the judge’s death. The research team is unaware that the mutants were secretly visited before by the evil pharmaceutical mogul Cabot (William Watson) and his hired hunters who tried to eliminate the kiddies but instead were eliminated. Thereby the killer babies attack the more benign researchers and slaughter the entire expedition party except for Jarvis, as his own son keeps him alive to steer the yacht to the mainland. After a crash at sea, there’s a forced stopover in Cuba. We learn from the visit that the baby killers breed other children, are super smart, telepathic and extremely dangerous. Once in Florida, Baby Jarvis tracks down mom. Which returns to same old theme from the original of there’s nothing to cure the ills of the world like a mother’s love.

For social commentary, Cohen is seemingly drawing parallels between the quarantined baby mutants and society’s treatment of AIDS victims. He also offers caustic comments on media exploitation and half-heartedly weighs in on the abortion debate.

Though not as involving as the other films in the series, it still is goofy fun. Black has little to do in an underwritten part and Moriarty, on the other hand, has too much to do and decides at some point in the film to act crazy and the usually capable actor delivers an unimpressive hammy performance. The film was shot quickly in four weeks in Hawaii (those great jungle scenes) and Los Angeles. 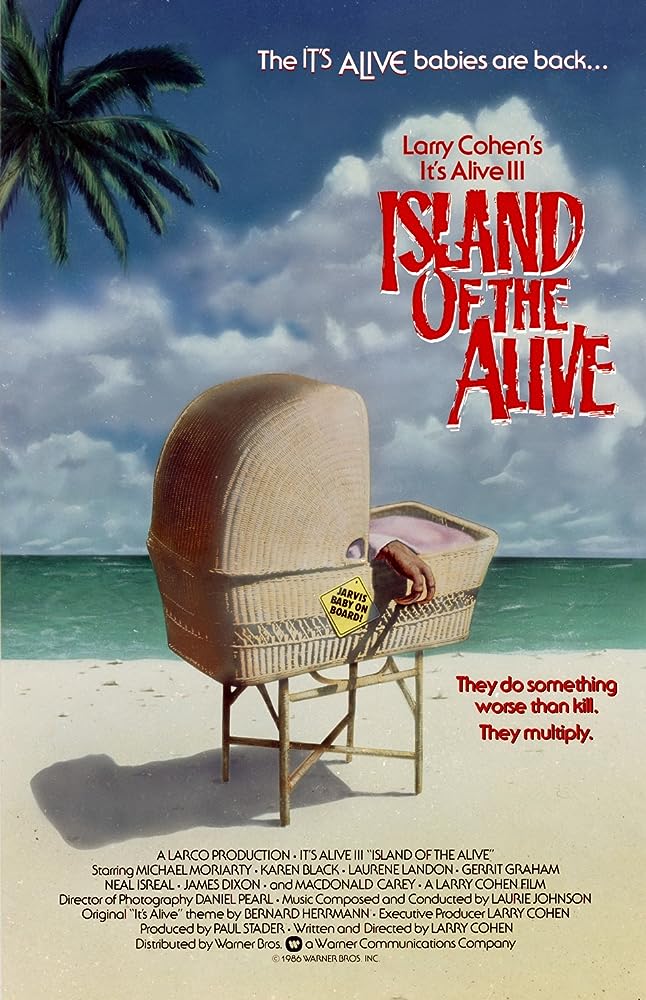