TALES OF HOFFMANN, THE

The always scintillating Brit writer-director-producer team of Michael Powell and Emeric Pressburger (“Black Narcissus”/”The Life and Death of Colonel Blimp”) follow-up to their successful The Red Shoes is a lavish light-hearted fantasy opera called The Tales of Hoffmann by Jacques Offenbach; it’s the final work the composer completed in 1880–he died shortly afterwards. Powell and Pressburger were urged by conductor Sir Thomas Beecham, a leading authority on this opera, to make it into a film and he would conduct the Royal Philharmonic Orchestra and would audition the singers. The stars include famed American tenor Robert Rounseville and renowned dancers Robert Helpmann and Moira Shearer. It won the Cannes Film Festival’s Special Jury Prize.

Only Rounseville and singer Ann Ayars actually sung their parts, as the other vocals were dubbed. The Red Shoes ballet company did the dancing, Sadler’s Wells’ Frederick Ashton did the choreography, Christopher Challis did an amazingly stunning job with the photography and Hein Heckroth did the arty set designs. Looking magnificently rich in Technicolor, accomplished with impeccable taste and held together by first-class dancing and compositions that more than made up for what the uneven film lacked in purpose, dramatics, heartache and coherence. It adds up to both a visual and auditory treat, a truly sumptuous opera–one of cinema’s best efforts.

The film is a staged performance of the opera telling in three stories (plus a prologue and epilogue) the great romances in the life of the magical poet-hero Hoffmann (Robert Rounseville). Hoffmann’s tales, like the Red Shoes, highlights the struggle between love and the artist’s dedication to his work, and the poet’s unrequited love. It aims to show that art can pave the way to make a smoother world than the real world of constant wars and nationalism

The prologue has Hoffmann telling a group of Nuremberg students “the three tales of my folly of love,” after watching in the theater a beautiful dancer named Stella (Moira Shearer). The first story, The Tale Of Olympia, enacts Hoffmann’s love as a Parisian student for a star ballerina named Olympia (Moira Shearer), who is a lifelike doll made by a puppeteer. The second story, The Tale Of Giulietta, has Hoffmann in Venice smitten by the beautiful courtesan Giulietta (Ludmiha Tcherina), who works in cahoots with an evil magician and traps the poet’s soul in a mirror until he frees himself from her clutches and smashes the mirror. The third story, The Tale Of Antonia, has Hoffmann fall for a conflicted Greek singer named Antonia (Ann Ayars) who is dying of consumption on a remote Greek island, and will eventually die in Hoffmann’s arms when a doctor gets her to sing for the last time. The epilogue returns to the opening sequence of Hoffmann watching the dancer Stella perform, and by this time we know a lot about the romantic poet and his quest.

It’s an elegant opera beautifully touched up by cinematic effects, which takes away a lot of the stodginess found in most operatic films. There’s an aesthete audience who will appreciate its beauty and inspirational message about art. But there are also many viewers who are not partial to opera and this is probably a film they will skip, even though it’s their loss. 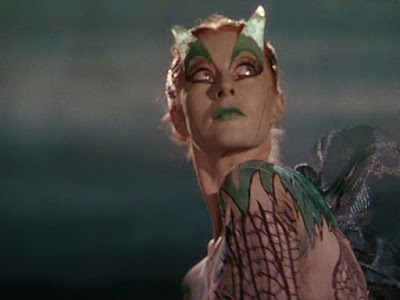 COLOR OUT OF SPACE

PHANTOM OF THE PARADISE